Advance Base @ the Empty Bottle, March 2013 (more by Stan Golovchuk) 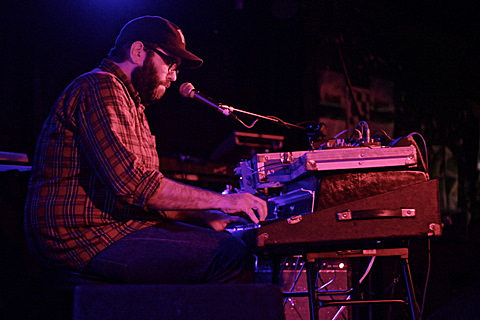 Today, Advance Base (aka the somber solo project of Owen Ashworth) has shared a great cover of the Neil Young tune "Philadelphia." As Ashworth put it:

"Philadelphia" is my favorite Neil Young song. It's from the soundtrack of the motion picture Philadelphia starring Tom Hanks & Denzel Washington. I went to see Neil Young play a concert the other night & he didn't play this song & I was bummed so I went home & recorded this.

You can take a listen to his super relaxed version at the bottom of this post.

Ashworth also has a few upcoming hometown shows on his schedule. The first is a performance at The Burlington on May 5 with Rob Jacobs and Mike Adams at his Honest Weight; $7 will get you in the door. He's also playing Constellation on May 24 as part of Brain Frame, the performative comix reading series. He'll be reading and performing live accompaniment at the early show and the late show.

All Advance Base dates and a stream of his "Philadelphia" cover lie after the jump...