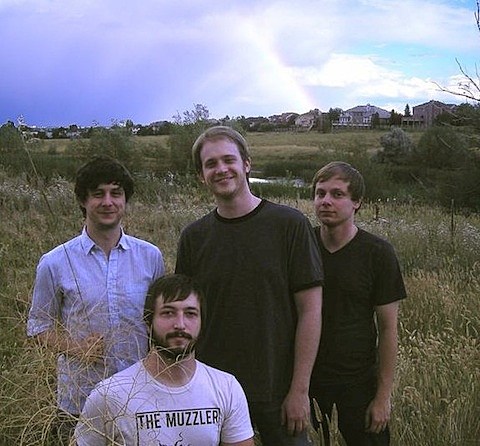 In January, Chicago post-rock quartet An Aesthetic Anaesthetic used Kickstarter to raise just over $2,000 to put towards their sophomore full-length album, NAMES, which was recorded by producer Sanford Parker at Engine Studios over the course of four days last week. NAMES will be released via Chicago's Artistic Integrity Records, with an estimated street date of July 2012. There will be a total of 500 vinyl copies (100 colored and 400 black), with art by Robert Donis. There are also 17-test pressings of the LP, four of which are claimed by Kickstarter contributors, with custom jackets by Grant Kersey.

An Aesthetic Anaesthetic released their second EP, Ghosts in the Red Wilderness, in February of 2011 and their debut full-length, Before the Machinery of Other Skeletons (a solid Allen Ginsberg reference), in August of 2011. They achieved a variety of moods through these mostly-instrumental recordings by combining elements of post-rock, math rock, punk, and metal. The band have stated that NAMES will be darker than previous efforts and that their goal in recording with Sanford Parker was "to harness the raw energy of their live show."

To experience that raw energy in the near future, head over to Schubas on Friday night (April 6) to catch them opening up for Cleveland's eclectic rock duo Mr. Gnome. Joining them will be Chicago dance-rockers Blane Fonda, who also used Kickstarter to raise funds for their recently released EP, Foolish Croon. Tickets are still available.

Some song streams from both AAA and Blane Fonda, below...