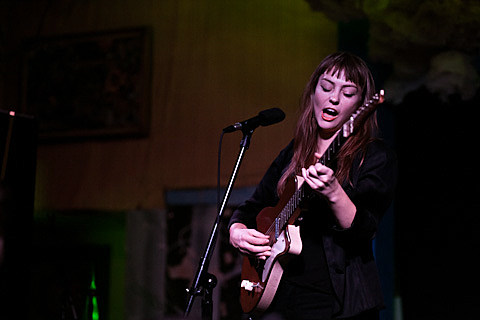 "I'm from Saint Louis. A lot of people wonder what influences me there, and not a lot did. I met the kids from Pillars & Tongues. They were at the time called Static Films and they had played house shows in Saint Louis and were very inspiring as far as telling me, "Dude, you got to go to Chicago--we can set up way more DIY shows even though you're underage." And then I moved to Chicago and it was the middle of winter and I didn't get connected to people right away and felt really discouraged. Eventually, I got to know Sabrina [Rush] and Kerry Couch from [defunct DIY space] the Ottoman Empire--Kerry who now owns Cafe Mustache--and they were running this place called the Sac House out of their previous house. It was right above Miko's [Italian] Ice, so they'd have summer shows over Miko's Ice, on the roof. It was just a blast. We would have two or three shows a month just at random houses and after a while people started to know about my music. I got a show at Ronny's when I was 20; it was my first big gig and I was opening for Marissa Nadler, so that was awesome 'cause I was always a huge fan of her music." [Angel Olsen]

Marissa Nadler, who Angel recorded a cover with in 2012, returns to Chicago to play Schubas on February 19. We have even less time to wait until Angel Olsen hits the Chicago stage again at Hideout (on 2/8), one of the three shows she has coming up with Water Liars (the third is on 2/9 at The Hangar in Carbondale).

Today Angel announced an even bigger tour which kicks off in San Francisco on April 6 and ends back in California later that month. No new Chicago date around that run yet, but maybe that will change after the 2/8 Hideout show (tickets still on sale). Check out all tour dates, along with one of Angel's two new videos, below...