At the Drive-In @ Lollapalooza 2012 (more by James Richards IV) 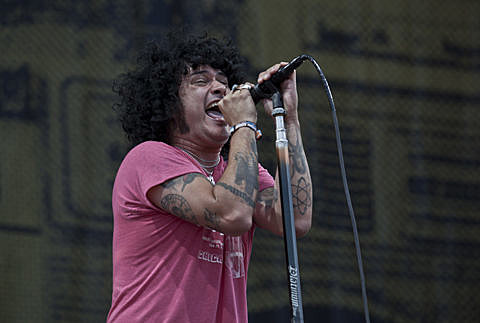 Cedric Bixler-Zavala and Omar Rodríguez-López's post-Mars Volta // At the Drive-In band Antemasque released their debut LP earlier this year, but it's since been taken off the internet and will be "officially" released in October via Omar's Nadie Sound label. While you wait for the full LP to arrive, you can take a listen to the album cuts "4AM" and "Ride Like The Devil's Son" at the bottom of this post.

Antemasque will be embarking on a fall international tour in October. Though Flea is featured on the album, the band's lineup is rounded out by permanent bassist Marfred Rodríguez-López and former Mars Volta drummer Dave Elitch (who's on the LP). Le Butcherettes have been named as main support for the tour -- Omar produced and played bass on their album and is in Bosnian Rainbows with LB frontwoman Teri Gender Bender. You can look for the two acts to tag Chicago for a show at Metro on November 16. Advance tickets are on sale now.

All Antemasque dates and those song streams lie after the jump...