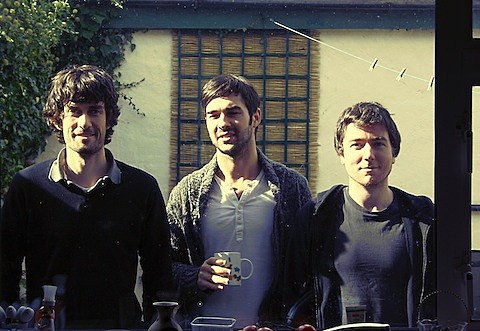 Dublin trio Autumn Owls are here for a visit. They're currently camped out at Engine Studios with producer Brian Deck (Modest Mouse, Iron & Wine, Fruit Bats), recording their debut full-length LP. Their two 2008 EPs, Insomnia Lodge and On the Trail of the Disappearing, showcased an interesting mix of folk and post-rock. Download three tracks from those albums at the top of this post. You can also check out some video footage of the band playing two new tracks from their upcoming album, below.

While they're here laying down some new material, Autumn Owls have a number of Chicago shows scheduled (the first happens TONIGHT (April 27), at Cal's Liquors). They'll play a 4PM Epitonic Saki Session with Big Science tomorrow, and then Reggie's Music Joint later that night with Like Pioneers and Brontosaurs. They are also playing Martyrs on May 14.

All dates and some videos/song streams below...