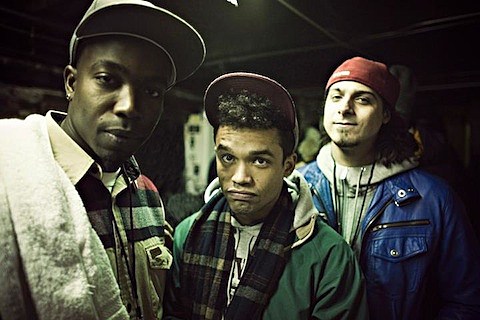 Chicago rappers BBU - standing for both Bin Laden Blowing Up and Brown, Black & Ugly - are set to release their sophomore mixtape titled bell hooks on February 21st via Mishka/Mad Decent/Audible Treats. On the tape, the four-man crew of Epic, Illekt, Jasson Perez, and DJ Esquire have tightened up their sound and showcase a wide variety of influences, from Bad Brains to Dead Prez.

Above, we have two bell hooks tracks, "Jumpers" and "Kurt De La Rocha" available for download. "Kurt De La Rocha" is a tribute to both Kurt Cobain (sampling Nirvana's "Polly") and Rage Against The Machine's Zack de la Rocha (borrowing lyrics from "Killing in the Name"). Both tracks are also streaming below, along with "Please, No Pictures" featuring Das Racist and another titled "Outlaw Culture."

On February 23rd, the group will celebrate the release of bell hooks with a show at Schubas. Billed as "BBU & friends," the night will also feature a performance by ShowYouSuck, DJ sets by Stefan Ponce and MattBoyWhite, and spoken word from Kevin Coval and Malcom London. Tickets are on sale now for just $5. You can also purchase $20 VIP tickets which include a t-shirt and physical copy of bell hooks.