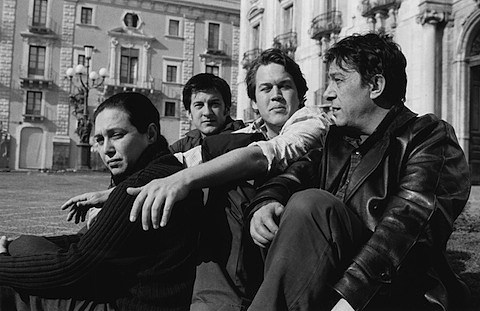 International math rock outfit Bellini are currently tracking their fourth album at Electrical Audio with Steve Albini. The LP will eventually hit stores via Temporary Residence Limited, who handled the release of 2005's Small Stones and 2009's The Precious Prize of Gravity.

Bellini, who are comprised of members of Girls Against Boys, Soulside, Don Caballero, and Uzeda, will also be playing a couple of Chicago shows this week. They'll headline Quenchers on Friday (9/7) and Saturday night (9/8), with different openers on each. IfIHadAHiFi and Fake Limbs will act as main support on Friday, while Bottomless Pit and Coffin Pricks will get things started on Saturday. Admission is donation-based. The group have also said that they'll be touring the world in support of their new album, so stay tuned for details on that.

Stream Bellini's most recent LP, The Precious Prize of Gravity, in its entirety below...

----
Bellini - The Precious Prize of Gravity