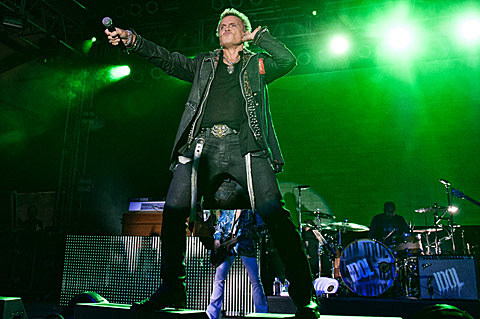 Billy Idol is a busy guy these days-- he welcomed an autobiography titled Dancing With Myself earlier this week, and is slated to release his first new studio effort since 2005's Devil's Playground, called Kings & Queens Of The Underground, on October 21. The LP was produced by Trevor Horn and Greg Kurstin, and includes guitar work from longtime collaborator Steve Stevens. You can get a feel for the album by checking out the cuts "Postcards from the Past" and "Can't Break Me Down" at the bottom of this post. Idol's autobiography is available for purchase via his website, where you can also read the prologue and a chapter excerpt.

Billy will support Dancing With Myself this week with an appearance at NYC's CBGB Fest. He'll play an acoustic set and will also participate in a Q&A as part of the festival's keynote address. He's also announced a January/February North American tour with direct support from Broncho. That tour includes a show at the Riviera Theatre on February 7. Tickets for the Chicago show go on sale this Friday (10/10) at 10AM CST; stay tuned for presale information.

All Billy Idol dates and those song streams lie after the jump...