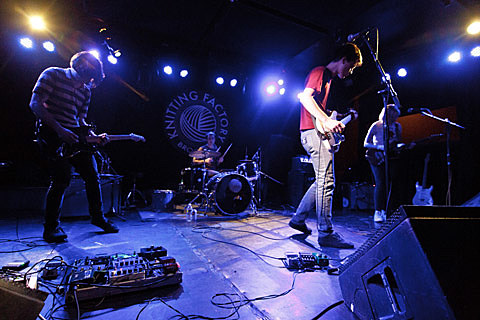 Philly outfit Bleeding Rainbow are slated to welcome their new album, Interrupt, on February 25 via Kanine Records. They've previously shared the great LP singles "So You Know" and "Images," and have now dropped off a joyous, garage-pop tune called "Tell Me" (via This is Fake DIY). Get a feel for the album by checking out the trio of singles at the bottom of this post. Interrupt is up for preorder via Kanine's webstore.

BR will be embarking on a winter North American tour with New York's Hunters later this week. That tour will tag Chicago for an Animal Kingdom-presented show at Emporium Arcade Bar on February 20 with The Funs, Earrings, and The Lemons. You'll get a free shot if you purchase advance tickets.

All Bleeding Rainbow dates and those song streams lie after the jump...

Bleeding Rainbow - "So You Know"