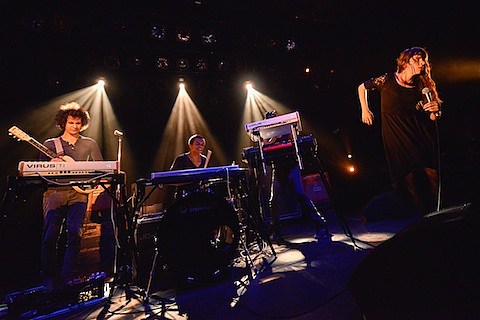 Bosnian Rainbows (formerly known as the Omar Rodriguez Lopez Group) will be touring throughout North America in 2013. They'll hit the road in mid-February and will reach Chicago on the 26th of the month for a performance at the Bottom Lounge. Advance tickets for the Chicago show are on sale now. All dates are listed below.

Though details are sparse, Bosnian Rainbows are expected to release their debut LP early next year. While rehearsing for a fall European tour at Clouds Hill Studios in Hambourg, Germany, Bosnian Rainbows recorded a half hour-long live session. That session has been released this month on 10" vinyl and DVD as a part of the Live at Clouds Hill box set. The set also includes a collaboration between Omar Rodriguez Lopez and Faust. It's available for purchase via Clouds Hill's webstore. That tour featured Le Butcherettes vocalist Teri Gender Bender, who is now a full-time band member. If you recall, Le Butcherettes headlined Saturday of Do Division 2012, and absolutely killed it.

All known Bosnian Rainbows tour dates and a few videos are below...