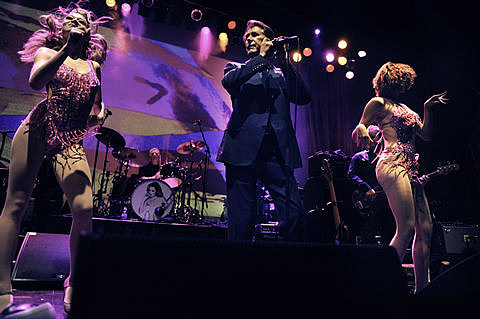 As we wrote on Brooklynvegan:

The velvety voice of Roxy Music and solo artist Bryan Ferry CBE (I think dude deserves a "Sir") recently released his thirteenth solo album Olympia. Featuring Kate Moss on the cover, the LP spans twelve tracks including "You Can Dance" which was given a video treatment and was performed on Letterman earlier this year (videos are [HERE]).

Ferry will tour the world to celebrate. His upcoming live dates include Israel, Russia, Europe, and the United States for the first time since 2002!

That tour hits Chicago's Civic Opera House on 10/11 and some tickets are still available. Last night (10/4), Ferry played a show at NJ's Wellmont Theater. Pictures and the setlist up now at BrooklynVegan.