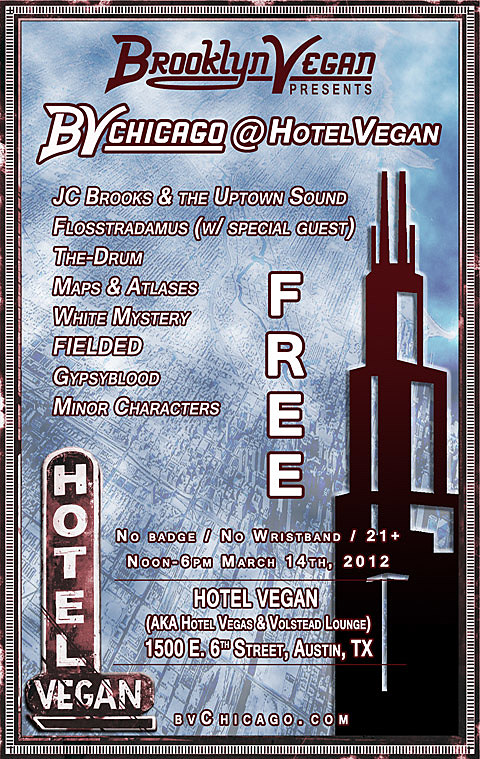 We're excited and pleased to announce BV Chicago's first-ever Austin event, a full stage of Chicago musicians along side TWO MORE BrooklynVegan-programmed stages, at Hotel 'Vegan' (aka Hotel Vegas & Volstead Lounge at1500 E. 6th Street) on Wednesday, March 14, 2012 from noon - 6PM. Hotel Vegan will be runing from Wednesday through Saturday during SXSW Music, and we're excited to be showcasing Chicago bands on one of the three stages, on the first of those four days.

Headlining the BV Chicago stage will be JC Brooks & the Uptown Sound (who just announced a big hometown show at Metro). Also on the bill: Flosstradamus (which one half of, J2K, performed at a recent BV Chicago event) with a special guest, The-Drum (who shared that bill with J2K), Maps & Atlases (who have a new album and big hometown show at Metro + tour coming up), White Mystery, FIELDED, Gypsyblood, and Minor Characters (who have a pre-SXSW show at Schubas).

Admission to Hotel 'Vegan' is 100% FREE and no badges/wristbands are required. There IS a 21+ age restriction though, sorry about that! We'll have complimentary beverages (while supplies last) from Sailor Jerry, Brooklyn Brewery, HobNob Wines, and Honest Tea, free treats from NadaMoo!, plus even more free stuff TBA!

Thanks to our backline partners Korg, Vox, and Blackstar Amplification for providing the gear to make this party possible.

And stay tuned for the rest of the "Hotel Vegan" lineups soon!

UPDATE: Here's what another one of the Wednesday stages looks like.