Coffinworm @ Power of the Riff East (more by Greg Cristman) 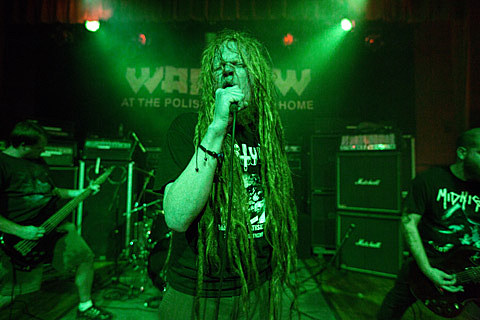 Coffinworm was formed under watchful eye of Choronzon in late 2007. The 'Great Bringer of Night' demo was recorded by Bob Fouts (Basement Rage Studios) in late 2008/early 2009 and led to an alliance with Profound Lore Records shortly afterwards. The 'When All Became None' full-length was recorded by Sanford Parker in December of 2009 within Semaphore Studios, Chicago, and released in April 2010. Summer 2010 saw a lineup change with J. joining the fold on drums and C. moving from behind the kit to guitar." - their bio

Coffinworm is an Indianapolis metal band with many ties to Chicago, including producer Sanford Parker who recently told us his Two 10 Albums of 2012. Here are Carl of Coffinworm's favorite albums and shows, Swans at Metro and Autopsy at Reggie's included. Check out his full 2012 list, below...