Stagnant Pools at Lincoln Hall in March (via Michael Gandy) 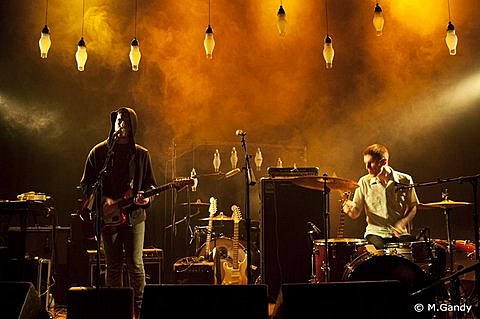 Bloomington, IN duo Stagnant Pools (brothers Bryan and Douglass Enas) recently announced their signing to Polyvinyl, and will release their first album for the label, Temporary Room, on August 7. You can grab two tracks from that release -- "Dead Sailor" and "Consistency" -- above, or stream them below. Both cuts are super muddy and soaked in reverb and distortion, but somewhere in this band's late '80s/early '90s record collection of noisy post-punk and shoegaze, must lie a scratched up, overplayed copy of Is This It that can't help but leave its mark on these songs.

Maybe you caught Stagnant Pools in Chicago when they opened for EMA at Lincoln Hall in March (pictured above). Or if you traveled a bit outside of Illinois, perhaps you saw them in Grand Rapids, opening for labelmates Japandroids, whose two-piece rock band set up is not too different from their own.

Stagnant Pools will be back in Chicago in July to play the just announced West Fest on July 7 on Chicago Ave with Black Lips, Bad Veins, He's My Brother She's My Sister, and more. It's their only upcoming date that we're aware of at the moment.