Pilgrim in New York in 2013 (more by Greg Cristman 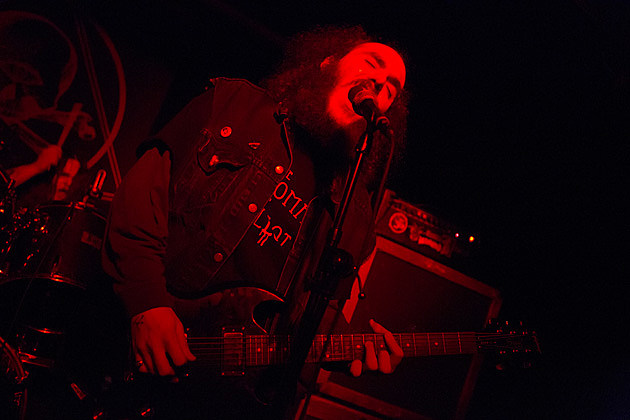 As usual, there's a ton of good heavy music happening in Chicago this summer, from both at home and abroad, and while we've covered some of it already (Agalloch are at Reggies tonight, for example), there's a lot more to get to in June alone for the despair-mongers among us.

The last couple weeks of June will see an abundance of hardcore-oriented options. Legendary NYC straight-edge hardcore band Judge are reunited and will play their only midwest date at The Metro tomorrow June 21 (tickets).

That same night another old school hardcore act, NYC shockers The Meatmen will stop by Reggies with SSD, Johnny Vomit, and Brickwall Vultures for what's sure to be a raucous set (tickets).

On the thrashier side of things, contemporary NYHC band Backtrack will be joined by locals Harms Way and Expire, New Jersey hardcore outfit Suburban Scum and more for a huge show at Beat Kitchen on June 26 (tickets).

In perhaps the highlight of all of the hardcore-inflected shows this month, Cobra Lounge will play host to an absolutely loaded bill featuring reunited crossover legends All Out War, Wisconsin death metal heavies Jungle Rot and local grind heroes Weekend Nachos. This one is not to be missed (tickets).

For the Satanists, the corpse-painted Columbians in Thy Antichrist will bring their unholy black metal to Cobra Lounge tomorrow 6/21 ((tickets).

You want more reunited 90s bands? We got you. Mildly hilarious Greek "symphonic" death-metallers Septicflesh, who tour without their vocalist will also stop by Reggies on July 29 (sensing a pattern here?). They'll be joined by Fleshgod Apocalypse, Black Crown Initiate, and Necronomicon, ensuring that other metal bills will at least have a hard time topping the name lineup here.

Are Swans even metal? Who cares. They're just the best, and as we've mentioned, they'll play two dates at Lincoln Hall with Xiu Xiu and tickets are only still available for the second night. So get on that.

If swaying slowly back and forth is more your speed than getting your ass kicked in the pit, June has still got you covered. Rhode Island trad-doom wizards Pilgrim will be bringing their ongoing tour in support of this year's monster II: Void Worship to Cobra Lounge this weekend, where they'll play on June 22 (Tickets) with Fister, Egypt, and Neverender.

Heavyweight San Francisco doom two-piece Black Cobra (ex-Cavity, Acid King) will bring their ongoing tour to Reggies on June 24, where they'll be joined by the local party-sludge outfit Lo-Pan (tickets) on what's sure to be an awesome bill.

More local sludge: the incredibly named High On Fire worshippers Cokegoat will speed things up on June 27 at Cobra Lounge (tickets) with Asatta, Arriver, and Razors.

That about covers it for June. Stay tuned to BV Chicago for more info about July and August metal shows that we haven't covered yet, and you can get more info on these shows and others at our newly completist Invisible Oranges-approved show listings page.