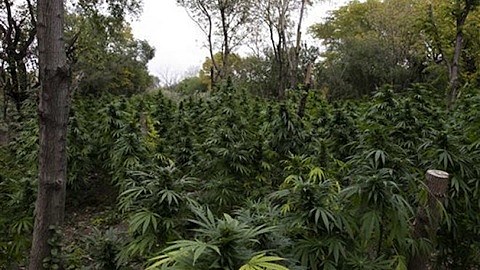 The Chicago Police Department spotted what an ABC News reporter called "a mountain of marijuana" growing on a farm on the South Side of the city...

Police in a helicopter stumbled upon what may be the largest outdoor pot farm in the city's history. Planted in rows and spread over an area the size of two football fields, as many as 1,500 plants averaging 6-feet tall were growing amidst heavy brush in an industrial area on the city's South Side.

"This would not be visible from the street," said Chicago Police Superintendent Garry McCarthy at a press conference today. "It's surrounded by a huge field that you wouldn't see anywhere (but) from the air. "

He estimated the hidden pot to be worth $7 million to $10 million.
[ABC News]

Check out a clip of an ABC reporter walking through the field (it's slightly hilarious) below...