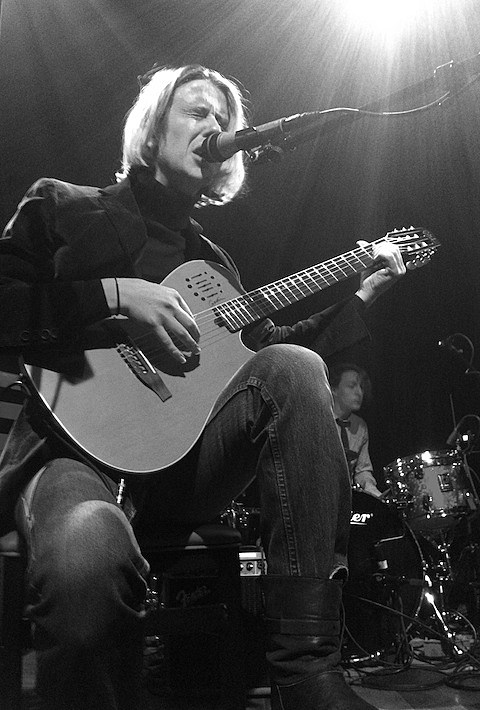 Before lights dimmed to black on the final act of a psych-pop opera steeped in San Francisco folk and classical songcraft, Christopher Owens broke studied concentration to hand out bunches of white and red roses to the first few rows of patient fans.

Owens delivered the 29-minutes of confessional storytelling that are Lysandre (released January 15th, 2013) with pained focus. Conducting without needing to wave a stick or turn a back to the audience, Owens lead an assembly of fantastic musicians without much ado. He drank nothing--neither beer nor water--said almost as little, and bowed graciously in his turtleneck at the end of every movement.

After playing through the album in full--a cool 29 minutes, if you're curious--the band returned for an encore set of covers artfully chosen to make a statement about the company Christopher Owens might belong in. The group floated effortlessly through "Wild World" by Cat Stevens, "Laleña" by Donovan, Simon and Garfunkel's "The Boxer," The Everly Brothers' "Let It Be Me," and "Don't Think Twice It's Alright" by Bob Dylan, making it hard not to believe the beaming face of a fellow loiterer that promised, "That guy [Owens] is somebody you're gonna make your kids listen to when you're 70 and they'll hate it. Then once you're dead they'll swear is the greatest. He'll still be around."

Chicago's Lincoln Hall was an aptly intimate place to host the album's first post-release debut. Owens was subtle, honest, and passionate, and his show was a delightful way to see a talented artist grow into himself. Just don't ask him to play any Girls songs.

A stream of Owens' debut solo LP, Lysandre, is below...