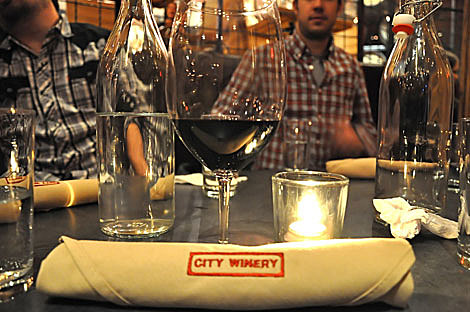 Like BrooklynVegan, the NYC-based City Winery (a music and wine venue we are big fans of) is setting up shop in Chicago....

A New York-based restaurant, winery and concert venue plans to open its second national location next spring in the West Loop, where its ownership is under contract to buy a nearly 28,000-square-foot property.

The venture of Michael Dorf, who opened City Winery in Manhattan in January 2009, plans to buy the 20,000-square-foot building and adjacent 7,875-square-foot lot at 1200 W. Randolph St.

Backed by local and New York investors, City Winery Chicago plans to spend about $3 million to upgrade the property, formerly the site of a food warehouse, Mr. Dorf says. He did not disclose how much the venture is paying but says he expects to close in October.

The property was most recently listed for $3.5 million, according to real estate data provider CoStar Group Inc. Robin Wold bought the building for $800,000 in 1996, according to public records.

City Winery Chicago will feature a winery and tasting room, a restaurant that seats 150, and a concert hall and private event space with seating for 300. In front of the building, there also will be a 5,000-square-foot outdoor wine garden for warm-weather months.

Live music is a key component in an area heavy on fine dining but light on entertainment variety. [ChicagoRealEstateDaily]

And speaking of things that started in NYC and then opened in Chicago, our good friends at Curbed (where we found the above article) are looking for a new editor for Curbed Chicago. Any real estate experts in the house?