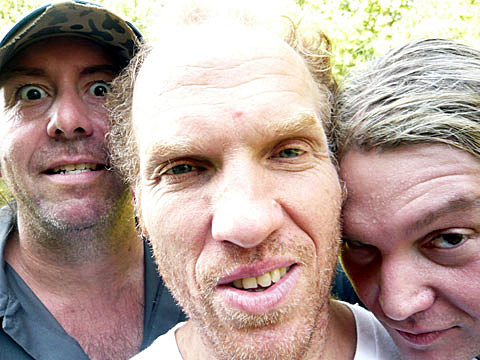 Chicago metal bands Austaras and Hunters were an odd choice of openers for Coliseum and Corrosion of Conformity, playing much heavier sets than both touring acts. Austaras is somewhat progressive, with vaguely melodic growling. They sang one or two clean vocal melodies, but I think their songs would benefit from melodic backing vocals. Hunters tend toward thrash and doom, with mostly monotone growls and screams. Both bands become repetitive, but Austaras are often saved by their drummer's tasteful accents and fills.

Coliseum opened with "Crime and the City," which contrasts between atmospheric and heavy punk sections. A modest crowd gathered during the openers, but the area in front of the stage was strangely empty as Coliseum began their second song. Guitarist Ryan Patterson sarcastically commented, "I appreciate all you guys holding up the bar...it might fall over otherwise." He also mentioned they weren't the kind of band who was going to hype up the crowd, and demonstrated it throughout the show by gesturing only to emphasize the music and not draw a crowd response. Patterson doesn't exactly come across as friendly, but at both times I've seen them this summer he gave extended speeches about the work they've put into their music and how it is their "driving force" and "lifeblood." After the speech the crowd seemed more receptive of the band overall. Bassist Mike Pascal clearly loves what he does, jumping around and making excited faces. Many of the songs were from their 2010 album House with a Curse. Coliseum will be playing with Boris and Tera Melos at Metro on October 19.

The older punks in the crowd got rowdy as soon as southern crossover legends Corrosion of Conformity started, with a minor fight breaking out amidst the mosh pit. The pit never fully reformed once it dissipated, but a few metal heads maintained an open circle by continuously walking around, dramatically shaking their fists in the air. A couple of guys were slinking around, bent over with their arms swinging low like cavemen whose limbs were too heavy to skank.

CoC vocalist Pepper Keenan was not present, leaving bassist Mike Dean to handle most of the vocals, with drummer Reed Mullen covering the rest in between cheeky grins that seemed to automatically appear during intense drum fills. Dean is a punk bluesman, singing with and yelling with as much grit as his bass tone. They sounded best when they all sang, and it would have been nice to hear more from Mullen. Woody Weatherman is a seasoned guitarist, freely using pinch harmonics and other techniques that were reminiscent of late 80s and early 90s thrash. Dean kept violently whipping empty water bottles against the walls bordering the stage, leading Mullen to rhetorically quip, "Is Mike having a tantrum?" All in all, Saturday night (7/30) at Reggie's was a great one for music.