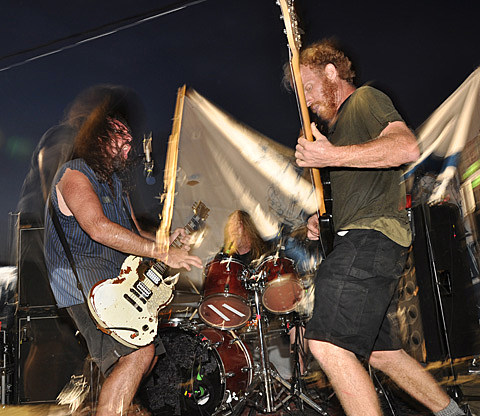 Corrosion of Conformity are gearing up for the release of their new, self-titled LP, out February 28th via Candlelight. The 11-track album was recorded at Dave Grohl's Studio 606 in LA, produced by John Custer/mixed by John Lousteau, and features artwork from Seldon Hunt (Melvins, Neurosis, Isis). In support of the LP, the band will head out on tour this March, reaching the Double Door on March 7th with Torche and Valient Thorr. This tour will feature CoC's classic three-piece lineup of Mike Dean (bass, vocals), Woody Weatherman (guitar), and Reed Mullin (drums). They'll be focusing in on Animosity, Technocracy, and their brand new songs, too. Tickets for the Chicago show go on sale this Saturday (1/7), at noon CST.

As BBG mentioned, Corrosion of Conformity will also play a late January date in Asheville, NC with Hail! Hornet and Zoroaster as part of the Slow Southern Steel tour, which reaches Reggie's on February 3rd.