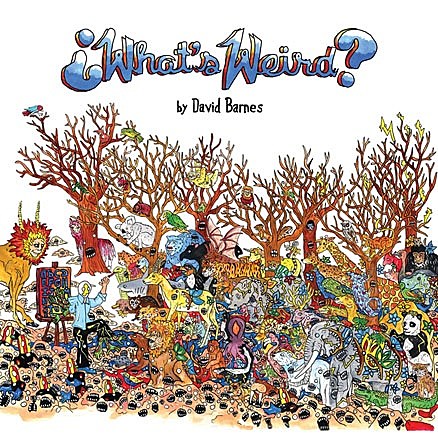 Back in April artist David Barnes, brother of Of Montreal frontman Kevin Barnes, released a 128-page art book, What's Weird?, that consists of paintings and drawings from the last 20-years, including album covers and other designs for the band. The book was limited to 3,000 copies. Here's a few words from Polyvinyl, who handled its release:

After 20 years and countless paintings, the idea manifested itself for David Barnes to curate his first book. In his true D.I.Y. style, Barnes personally poured over hundreds of drawings and paintings spanning his career.

He picked and placed each piece to create What's Weird?--a book showcasing over 100 paintings, hundreds of sketches and doodles, and funny, interesting, insightful comments about the pieces written by Barnes--all providing a glimpse into his mind and unique creative process.

Over the past decade, Barnes has developed a cult following drawing portraits of fans in his unique style and achieved widespread recognition for his work as art director for Of Montreal (his brother Kevin's band).

Barnes' visual interpretations of the group's music has been manifested in the form of iconic album covers and theatrical live performances that feature skits along with elaborate stage sets and props.

As mentioned, Of Montreal hit Metro for a March 28 performance in support of their new album, Paralytic Stalks, with openers Loney Dear and Kishi Bashi (who is also a member of the band). Tickets are still available. One lucky BVC-reader will receive BOTH a pair of tickets to the show AND a copy of David's What's Weird? art book! Contest details can be found below.

Of Montreal hit SXSW this week for two performances: their label's showcase on Thursday, March 15 and Under the Radar magazine's day party on the 16th, where they'll play their album The Sunlandic Twins in full for the first time.

--
For a chance at winning tickets to see Of Montreal @ Metro AND a copy of David Barnes' What's Weird? art book: Either tweet something creative that includes @bvChicago, "Of Montreal" & "What's Weird?" in the tweet, OR send an email to BVCONTESTS@HOTMAIL.COM with the subject line "What's Weird? - Chicago" with your first and last name in the body. We'll pick a winner at random and contact them with more details. Your email will not be shared with anyone else. Good luck!
--
Of Montreal - "Wraith Pinned to the Mist"