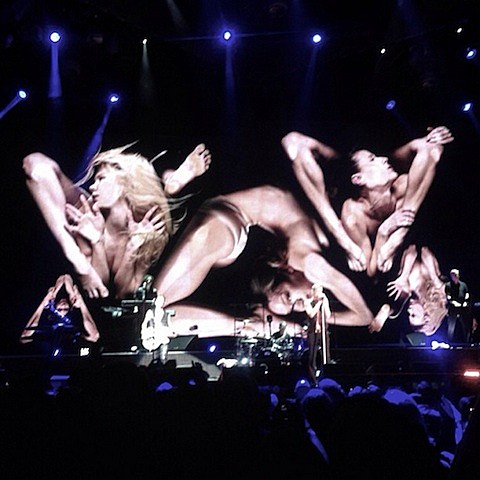 We approached the final stretch of the journey to Depeche Mode's Tinley Park, IL show at the First Midwest Bank Amphitheatre on Saturday night (8/24) just as the sun was starting to set. But as it got darker, the one narrow road leading to the venue became more and more jammed until we were at a complete standstill that lasted almost an hour. Once inside the gates we were quickly squared up and parked with some guidance from volunteers, but the long car lines unfortunately meant missing the great Bat For Lashes.

Fans with "lawn seats" who arrived early had staked out their vantage points on the upper field with blankets and picnic mats. Depeche Mode was already warmed up by the time we found a good spot. They had started off with "Welcome to My World," "Angel," and "Walking In My Shoes." Later the band played their excellent 2004 single "Precious" followed by "Black Celebration," while accompanied by visuals that displayed beautiful bottle rocket sparkles and exploding lava.

The red lights from the stage illuminated the throngs of fans making them look like red blood cells attempting to clot a wound cut open by some of Mode's darker songs. Frontman Dave Gahan played with his mic and shared it with the crowd on a few occasions while busting some moves. Gahan didn't remain the center of attention for the entire show though as Martin Gore, the band's principal songwriter, got up and shared vocal duties on a handful of songs. He even sang a few on his own, including a haunting version of "Higher Love." Fans exploded in applause when the band performed popular numbers like "Enjoy the Silence" and "Personal Jesus." However, the biggest highlight of the night was when they returned to the stage for an encore and played their synth-pop classic "Just Can't Enough." It was a wonderful throwback for older fans and a nice counter to the outfit's gloomier songs. In a way the band's setlist came full circle that night, some of the new with some of the old - something for everyone.

Depeche Mode's complete setlist and a few videos lie after the jump...