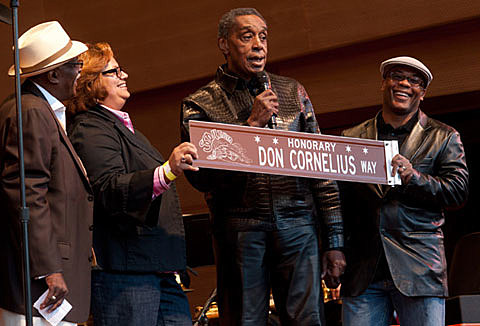 As sadly mentioned here and reported yesterday on BrooklynVegan, and everywhere, Soul Train's Don Cornelius took his own life at 75 years old. Today the AP put out an article that reminds us again of what we have to be proud of. As seen in the Washington Post:

When this proud city welcomed back hometown hero Don Cornelius last year, it wasn't just Chicago-style -- it was "Soul Train" style, complete with Afro wigs, bell bottoms and hip-shaking in the streets.

The 40th anniversary celebrations for "Soul Train" traced a remarkable journey for a former Chicago police officer who got his start in broadcasting when he pulled over a radio executive in a traffic stop and then had to build up his pioneering show one step at a time.

Cornelius, who became an icon defining black culture in America for decades, died at his California home Wednesday of a self-inflicted gunshot wound. He was 75.

While the South Side native and his show left Chicago decades ago for Los Angeles, his legacy has lived on here -- in the "Don Cornelius Way" street sign west of downtown, in the teens and performers who boogied onstage during the early days of "Soul Train" and in the audiences who were glued to their televisions every Saturday to see the newest dance moves and styles....

Watch a WGN report entitled "What Don Cornelius Mean to Chicago", HERE, and a Soul Train video below...