interior of the Congress Theater (more by Chase Turner) 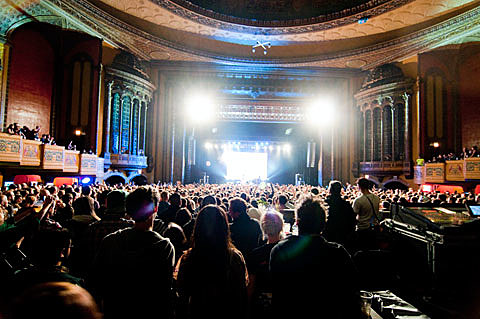 As part of a new plan of operation for the embattled Congress Theater, DNAinfo points out that one of its stipulations is an official ban on EDM for the venue. The agreement was signed by venue owner Eddie Carranza and City of Chicago local liquor commissioner Gregory Steadman in late-July. The conditions of the plan of operation (EDM ban included) apply to current and future owners, "the business address, the licensee, and to all officers, managers, partners, and direct or indirect owners of the licensed entity." The Congress lost its liquor license in May of 2013.

EDM, as defined by the City of Chicago, is "music created by a DJ or multiple DJs primarily using specialized equipment and software instead of traditional instruments." "... And an EDM performance shall be defined as a performance of Electronic Dance Music or any performance by a DJ or multiple DJs featured the playing of prerecorded music. Performers that incorporate electronic beats or prerecorded music in their acts shall be allowed, provided those performers either sing vocals or play an instrument(s) (or do both) during their performance." Alderman Joe Moreno (1st Ward) offered, "It's not the genre, it's the way the owner handles the genre." "I don't blame the genre or the artists, it's the operator who has to be able to handle the crowd. Unfortunately, the Congress has a history of not being able to manage certain types of crowds." Carranza declined to comment about the agreement.