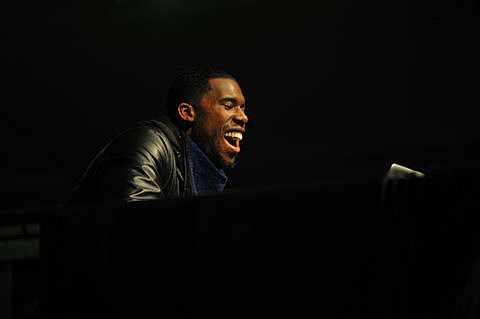 Since Flying Lotus signed with Warp in 2007, he's released two full lengths, Los Angeles and Cosmogramma, and two EPs, Reset and Pattern+Grid World. If you've missed out on any of those releases, now's a great time to catch up because the label just reissued them all on vinyl and you can also stream them at Bleep's website, where the vinyls are available to purchase individually or as a bundle.

Meanwhile, FlyLo is in Chicago this weekend for Pitchfork Festival, which he plays on Saturday (7/14), and to be the musical guest of Adult Swim's The Eric Andre Show at Bottom Lounge on Sunday (7/15). As discussed, he's also throwing a Brainfeeder showcase on Saturday night (7/14) near Union Park with Jeremiah Jae, Azizi Gibson, Push Beats, and a "very special guest." We can't say who the guest is but Brainfeeder is Flying Lotus's label, so... Any guesses? RSVP is still open.

Azizi Gibson, who plays the Brainfeeder showcase, was recently signed to the label. Azizi is a rapper from LA and according to facebook, his interests are "money, pussy, success." If FlyLo signed him we can bet he's pretty good, since we know how picky FlyLo is with rap these days. See for yourself, by checking out Azizi's video for "Booshie Champagne" below.