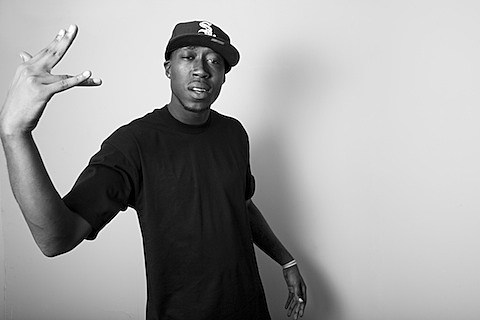 As part of a new Red Bull Sound Select concert series (of which BrooklynVegan is also a partner), Chicago hip hop blog Fake Shore Drive will be presenting a great show at the Bottom Lounge on February 7. Freddie Gibbs will headline the venue with support from Sasha Go Hard, ShowYouSuck, and Tree. Extremely cheap tickets ($3) for the show are on sale now.

Freddie Gibbs dropped his most recent project, Baby Face Killa, back in September. You can take a listen to the 18-track tape in its entirety at the bottom of this post. Gibbs released a video for Baby Face Killa's "The Hard" last month, which is also below.

Sasha Go Hard is set to release her new mixtape, Round 3, on February 4, just in time for the show. Earlier this month, she released a video for a new song called "Pretty Fly." It's unclear if "Pretty Fly" will be featured on Round 3, but either way you can check out the video below.

ShowYouSuck celebrated the release of his newest mixtape, One Man Pizza Party III: Rest In Pizza, with a performance at the Bottom Lounge a couple of weeks ago. Were you there? It was packed, and they gave out free pizza.

Tree's latest project, titled Tree Featuring The City, was released on December 31 and features Project Mayhem, Chance the Rapper, Naledge, and others. That mixtape is available for free download HERE.

Song streams // videos from all are below...