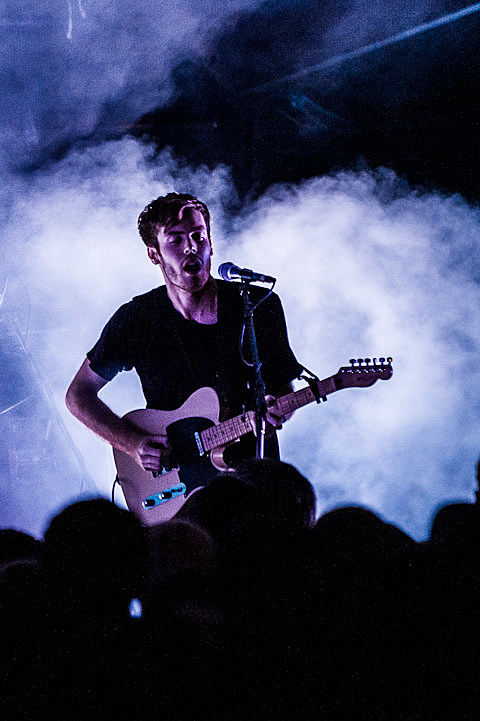 It's the archetypal indie success story. A soft-spoken, fashionably dressed kid from small town, USA gets discovered for his musical talent and uproots to Brooklyn to bloom. This sort of discovery has been made possible by a revolution in technology and culture that has broadened our scope of what a rock star can be, to include the isolated songwriter making pop music out of a hole-in-the-wall apartment in an anonymous town. Sampling, programmed drums, the remarkable versatility of the synthesizer, and the Internet have enabled musicians across the globe to record well-produced tracks from the bedroom. Youth Lagoon, Washed Out, Bon Iver, King Krule, Toro Y Moi, and now Wild Nothing epitomize this quiet dream.

I had the chance to catch up with Jack Tatum, the latest incarnation of this story and the artist behind Wild Nothing, about the past few years and how his music fits into the current climate. The band's been on tour the past two months and will be for another two with label-mates DIIV. They play Chicago's Empty Bottle this Sunday.

Coming from Blacksburg, Va - "sleepy town" might be a severe understatement - and suddenly getting picked up by Brooklyn's Captured Tracks, featured at Pitchfork Fest 2012, and managed by We Are Free (Yeasayer, Dirty Projectors, Beach House, among others); what is that transition like?

Jack Tatum: Actually, for me, it's felt like a really slow, gradual process - though a little bit shocking at first, especially when I still lived in Blacksburg. I wrote the first album there while I was still in school and things didn't really start picking up until that first summer after I graduated [summer 2009]. So, at that point, I was already kind of on my way out of Blacksburg. It all happened one thing at a time; I guess the first was Captured Tracks picking up the record. I actually hadn't even started work on the album until they got in touch. They asked if I wanted to do a record and I said OK, of course. I can look back on that time and it does seems a little strange, but I guess it's all settled into some form of normalcy for me now.

Dance music has been a powerful influence in the indie pop coming out recently. Wild Nothing frequently feels like unabashed pop, so where does your music fit in relationship to this influence?

I don't have any sort of direct influence from dance music in particular. I draw influence from a lot of 80s music - and that could mean anything from a band like The Chameleons to David Bowie. I listened to a lot of 80s-era Bowie when we were making the new record (Nocturne), like Let's Dance, which itself is dance music to a certain degree. Maybe not dance music, but danceable. It's that sort of upbeatness. I really like minimalist dance stuff like Fields too. There are moments on this new album, even though it's a little more mid-tempo, that have that upbeat punch.

I think the way you described Bowie fits your sound as well: "not dance music, but danceable." And maybe that's what I meant with my previous statement, a lot of pop-focused indie music coming out now is falling into that sort of realm.

Yeah, it's a reflection of my relationship with live music. And the relationship I have with my own music when I play live. I realized certain moments when we would play songs off the first record live that people really responded to more than others. And when a song had a danceable quality, people responded to it. I guess it's more a feeling about the music, rather than a thought.

On your first record, Gemini, Wild Nothing was a bedroom solo project. I'm curious how your songwriting process has developed in the past two years. Obviously playing live has influenced it. You started with a lot of electronic drum tracks, trying to fill in the gaps as a one-man band. Has your use of electronic sounds changed with the addition of a live band? And are you still at the helm in terms of songwriting or is there more collaboration?

With the first album, I didn't have the ability to record drums. I was very limited space-wise and equipment-wise and really, I wasn't knowledgeable enough to attack that. I could have done it and it probably would have sounded pretty awful. So yeah, the first album was all programmed drums, which was born out of necessity, but because of that, it changed the way I wrote. When you have electronic-oriented drums - even though I tried to get as real of a drum tone as I could - it's a very rigid thing. Even still, I do a lot of demos and other projects at home with programmed drums, because I think it is an interesting way to write songs.

But, for Nocturne, I knew I wanted to do something new, and I could hear how I wanted my songs to play out in a more traditional, rock band sense, with live drums and instrumentation. So I tried to incorporate that - I got a drummer to come in for the second record. Other than that, I still played all the other parts. The full band was a decision born out of playing songs live and seeing how that worked, then that influenced how I wrote songs on Nocturne - attempting to capture that live sound. The thing about the first album is that it sounds canned in a way. And I think that works for its style, but I just wanted to try something different.

How's the tour going? It's a long one (clocking in at 4 months), involving a trip to Europe soon, and support from DIIV, your boys from Captured Tracks (which seem like a great complement to your sound). Any funny stories?

Well, we're about halfway through this tour across North American and into Europe. We did a three-week tour supporting Beach House earlier this summer, so we just stayed in the States. It's been interesting because we took such a long break from touring before this summer so that I could work on the new record. It feels like we just started playing shows again [laughs]. Touring with a five piece is great. It's fun being able to tour with a band like DIIV too -- that you get along with and enjoy their music - it just makes playing shows so much better. Musically, I think we're really great fits. Our synth player broke his arm skateboarding in a warehouse in Portland earlier this summer. So ya know, that kinda sucked... But he can still play! Just struggling a little bit. That's been the eventful thing. Touring is such a funny thing - people always expect it to be this crazy time, but in reality you're just doing the same thing every night. It's hard for me even to distinguish at this point. Usually earlier in the tour, you can pick out certain moments, but at this point, it's all a blur.