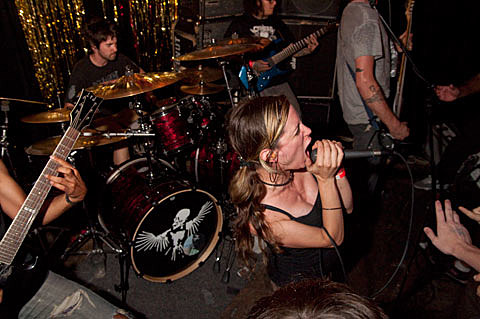 Canadian grind oddballs Fuck the Facts like to keep themselves busy -- take a look at their lengthy Metal Archives discography for proof. Their 2013 EP Amer didn't get as much love as it deserved (though we enjoyed it and spoke to the band about it), but unsurprisingly, they're moving on at full speed anyway. The band are out on a northern US/Canadian tour for most of April and part of May. Their tour will hit Chicago at LiveWire Lounge on Thursday (4/17) along with a strong, mostly local support slate that also includes 'thrash metal supergroup' Chicago Thrash Ensemble, bizarro noise unit Microwaves, black/death/grind/supreme pizza freewheelers Immortal Bird, and sludge slingers River Coffin. No presale, but tix are $10 at the door.

Fuck the Facts' tour dates are listed, along with a stream of the Amer EP if you missed it upon its release, below...