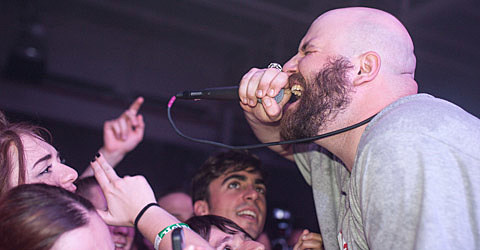 Fucked Up are currently on tour throughout North America, and will tag Chicago this weekend for a performance at Reggie's on Saturday night (7/27) with Brick Assassin and Hobo and Boxcar. If you haven't seen FU live, what are you waiting for? Ol' Pink Eyes (aka frontman Damian Abraham) spends a majority of the show in the crowd, and the band are incredibly tight. They've been playing a few new songs on this run too. Advance tickets for the Chicago show are still available. It's their last North American show before heading off to Europe next month, so it's bound to be an extra high-energy gig.

All known Fucked Up dates and some video footage from their recent show at Brooklyn's House of Vans (with Hop Along) are below...