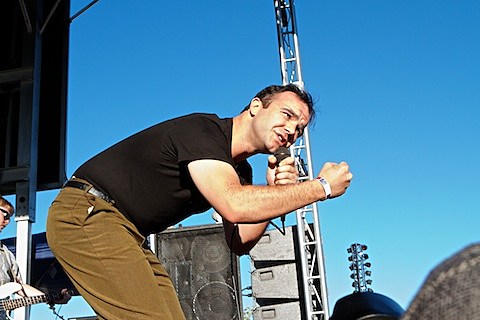 Baltimore's Future Islands just welcomed a new 7" via Upset the Rhythm. The A-side, "Tomorrow," is a soulful, slow-burning jam that features additional vocals from Jenn Wasner (of Wye Oak, Flock of Dimes), Lexie Mountain, and Elena Johnston. You can stream that track at the bottom of this post. The 7" is on white vinyl and is limited to 1,000 copies worldwide. You can order the single HERE.

Future Islands kick off a September North American tour tonight (9/4) in San Francisco, CA, and then are set to embark on a US run in November. That November run features support from Talk Normal on all dates, and Dope Body will join the caravan towards the end of the month. The three groups will play a Chicago show at Lincoln Hall on November 18. Tickets go on sale this Friday (9/7) at noon CST.

By the time this tour rolls around, Talk Normal will be toting a new LP. Sunshine is due out on October 23 via Joyful Noise, and you can grab its lead single "Bad Date" HERE.

All Future Islands dates and a stream of their new single are below...