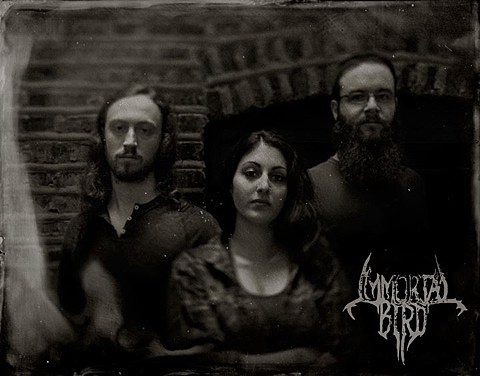 Chicago black/death metal band Immortal Bird (members of Thrawsunblat and others) are releasing their debut EP, Akrasia, on December 3 via Closed Casket Recordings. Here's what we had to say about it:

I suspect that most coverage of this band will play up the Thrawsunblat connection, but the two have little in common. Immortal Bird ditch the pretty pastoralism in favor of an inward-looking cosmpolitan ugliness that sometimes evokes a less-patient version of early Castevet. Opener "Spitting Teeth" delivers their melange at its best. Its ingredients: blurry, dissonant black metal fluttering; lots of nervy arpeggios; occasional stop-start trickery; dirty riffs played cleanly. Kurt Ballou's HM2-free mix ironically spotlights guitarist Evan Berry's performance more than Amitay's, but it's not such a bad thing -- his versatile playing carries the band's charge.

The band will be playing a release show for their EP in their hometown on December 7 at Cobra Lounge with Crusader and Gnarhval. Tickets for that show are on sale now.

Stream "Spitting Teeth" from the upcoming EP, below...