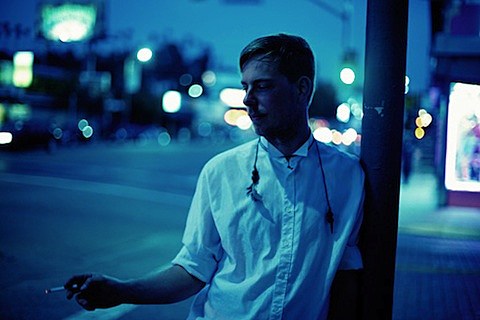 Indians (the project of Copenhagen's Søren Løkke Juul) are currently touring throughout North America with Other Lives. As discussed, that tour finishes off with a two-night stand in Chicago - Schubas on December 7 and Lincoln Hall on December 8. Though two-show passes are now sold-out, individual tickets for their Schubas and Lincoln Hall performances are still available. Indians will also be playing an in-store at Permanent Records on December 8 at 2PM. Admission is free but the shop doesn't hold all that many people; get there early.

Juul and co. are gearing up for the release of their debut LP, Somewhere Else, out January 28 (UK) // 29 (North America). The first few singles that Indians have shared so far remind me a bit of early Youth Lagoon, but with more avant-pop in the mix. You can take a listen to the tracks "Magic Kids," "New," "I am Hunted," and "Cakelayers" at the bottom of this post. 4AD have also said that "whilst stocks last, a ten-track tour edition of the album has been pressed on vinyl and will be on sale on their tour." Look for Somewhere Else at Schubas, Lincoln Hall, and possibly Permanent Records (on that Saturday afternoon at least).

All Indians tour dates and some song streams // videos are below...