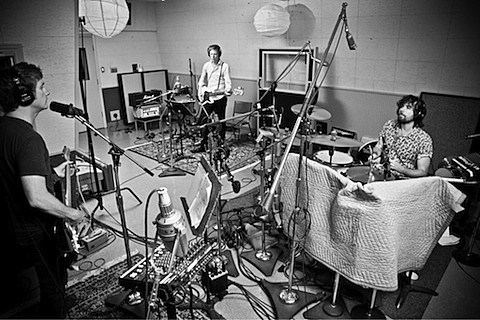 Split Single is the project of Evanston, IL native Jason Narducy (of the Bob Mould Band, Verbow, ex-Telekinesis, etc.). Narducy entered the studio in the summer of 2012 to track a full-length LP with Britt Daniel (Spoon, Divine Fits) on bass and Jon Wurster (Superchunk, Mountain Goats, Bob Mould Band) on drums. There aren't many details available regarding that album, but Narducy recently began streaming three tracks from it. You can sample his sunny pop by checking out "Fragmented World," "Waiting For The Sun," and "Last Goodbye" at the bottom of this post.

Split Single have a lone upcoming show at Schubas on July 27. Narducy will be joined by Tim Remis (of Sweet Cobra) on bass and Neil Hennessy (of The Lawrence Arms, Smoking Popes) on drums. The trio recently completed a mini-Midwest tour with Divine Fits. Advance tickets for the Chicago show are on sale now.

Those Split Single song streams are below...

Split Single - "Waiting For The Sun"