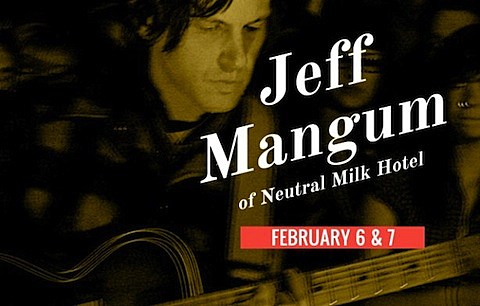 He'd been away for a while, after all, and more than 900 fans who packed the beautiful 100-year-old theater in the first of two sold-out concerts were understandably wondering where he'd been.

"Living with the love of my life," he said. After releasing two acclaimed Neutral Milk Hotel albums in the '90s, Mangum drifted away from concert stages, only to return last year to find that his music had grown in stature and inspired countless bands.

Mangum reaffirmed the durability of the songs he recorded in the '90s when he performed a largely solo set. Perched on a chair among four acoustic guitars, he looked like a hobo who had just hopped off the nearest train in his conductor's cap and checkerboard shirt with rolled up sleeves.

He wasn't a particularly fancy musician. A few chords were enough, and he never bothered with finger-picking or solos. Instead, he played the guitar more like a drum - at times banging on it with his knuckles - to send the songs hurtling ahead. His voice rang out over the top of the rudimentary chords, a pliable instrument that nailed notes with unexpected precision. [Greg Kot, Chicago Tribune]

Check out Mangum's full setlist below, which included: "In the Aeroplane Over the Sea," "Two-Headed Boy," "The King of Carrot Flowers, Pts. 1, 2 & 3," "Oh Comely," and other favorites. "Indie rock's prodigal son" plays the theater again TONIGHT (2/7). Were you able to grab tickets?