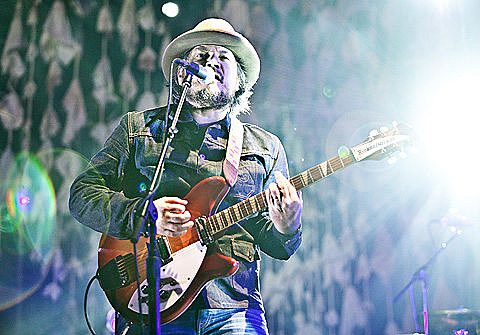 Jeff Tweedy and Mavis Staples are at it again. The pair are currently in the studio working on the follow up to their 2010 Grammy-winning collaboration, You Are Not Alone. The currently untitled LP will hit stores sometime next year via Anti-. On Thursday night (12/13) Tweedy and Staples played the final episode of The Colbert Report's 2012 season. They were joined by Sean Lennon and the Harlem Gospel Choir, and performed the John Lennon // Yoko Ono tune "Happy Xmas (War Is Over)." Interestingly enough, the original recording features backing vocals from children of the Harlem Community Choir. You can check out the Colbert footage below.

As discussed, Jeff Tweedy will be performing at The Second City's annual Letters to Santa benefit on December 18. One of the major auction items up for grabs is a 30-song living room concert from Tweedy. If you walked away with the prize would the Black Eyed Peas' "I Got A Feeling" be one of the 30 you'd ask him to play?

Footage of "Happy Xmas (War Is Over)" from Colbert is below...