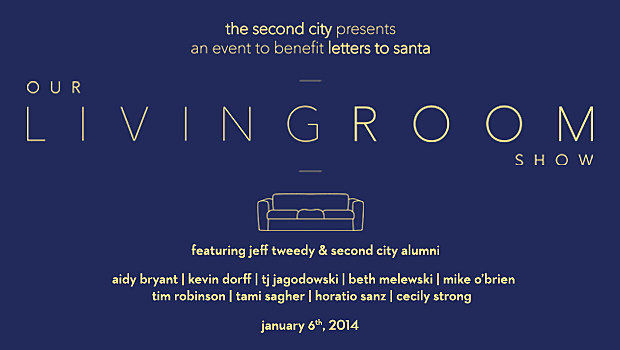 House seating tickets are now on sale for Our Living Room Show, a once-in-a-lifetime evening of comedy and music at Chicago's Up Comedy Club on Monday, January 6th, 2014.

Information on ticket sales is as follows:

Front Row Seating, $500: Audience members of our annual The Second City That Never Sleeps: 24 Hour (December 17th - 18th) will have first access to purchase front row tickets to Our Living Room Show. Remaining tickets will go on sale via the Up Comedy Club Box Office on December 18th at 6:00 p.m.

Premium Rail Seating, $1000: The best seats in the house! Ticket price includes one song request Jeff Tweedy will play during his set. These tickets will also be available first to audience members of 24 Hour, and any remaining rail seats will go on sale via the Up Comedy Club Box Office on December 18th at 6:00 p.m.

Jeff Tweedy is also involved in the 24 Hour Marathon event mentioned above.