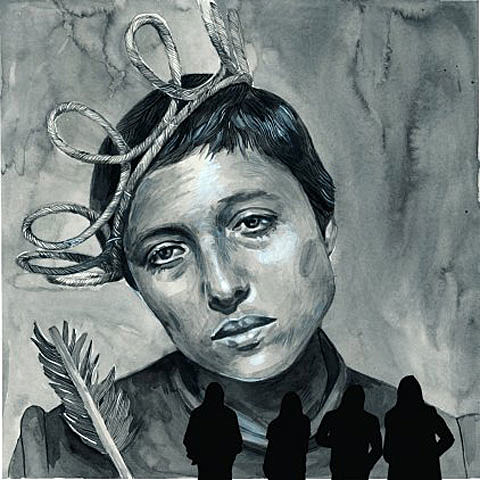 The label sums it up:

Joan of Arc have always been an unpredictable band. In their 17 year history they have consistently side-stepped convention and expectation, often leaving less-adventurous listeners scratching their heads in the wake of their insane endeavors. In 2011 Joan of Arc released their most conventionally "rocking" album in years, the Albini-engineered Life Like. Now in 2012, Joan of Arc explore the other extreme: an epic instrumental soundtrack to the 1928 silent film The Passion of Joan of Arc.

You read that correctly, Chicago's Joan of Arc have written and recorded a complete soundtrack for the 80 minute classic French silent film The Passion of Joan of Arc. Recorded live on opening night of the 2011 Chicago International Movies and Music Festival, the new album Joan of Arc Presents Joan of Arc is slated for release on April 10 on Joyful Noise Recordings.

Released on vinyl and digital only, Joan of Arc Presents Joan of Arc is intended to be synced manually to film all Dark Side of the Moon / Wizard of Oz style.

You can order at Joyful Noise now.

In related news, Victor Villarreal is currently finishing up a tour in Indiana, and Joan of Arc play play Metro on 2/25 with the Promise Ring (now sold out of course).

Joan of Arc-related project Love of Everything play with Slow Club and Air Waves at the Empty Bottle three days earlier. Tickets are still available.