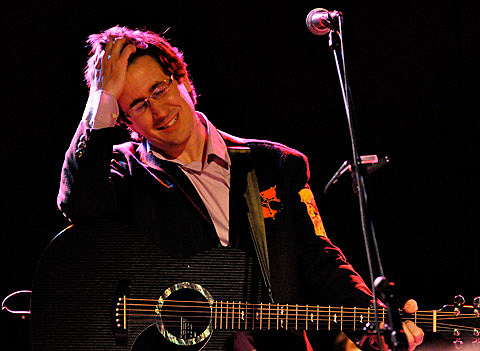 John Darnielle (aka The Mountain Goats) recently visited Chicago to perform at The Second City's Letters To Santa benefit, and while in town, managed to visit the A.V. Club as well. He performed the Hugh Martin and Ralph Blaine holiday classic "Have Yourself A Merry Little Christmas."

Wye Oak was in town the same day--they're pals--and Darnielle had the funny idea of singing the song directly to Jenn Wasner. Scheduling didn't work, so we put together a silly second version of this video, especially for you. [A.V. Club]

Check out both versions below, along with some videos of John performing at Letters To Santa.

--
John Darnielle - "Have Yourself A Merry Little Christmas" @ A.V. Club

--
The Mountain Goats - "My Favorite Things" @ The Second City