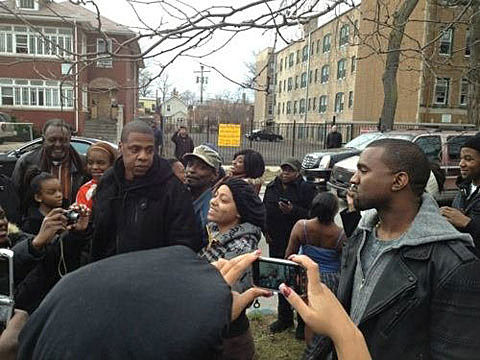 "Chicago's prodigal son returned home this week for the Watch The Throne tour stop. And [on 12/1], Kanye West brought his homie Jay-Z along for a neighborhood visit, likely to family and friends.

A hometown hero can't go back to the Chi without seeing his people. Mr. West surprised residents around the 77th St./South Shore area just ahead of the second and final WTT show at the United Center.

Once folks found out he and Jay-Z were outside on a neighbor's lawn, the whole neighborhood mobbed them with cameras." [The YBF]

As previously mentioned, Kanye and Jay brought their Watch the Throne tour to Chicago for two nights last week. Check out a video of Kanye dedicating one of the shows to his mom, below...