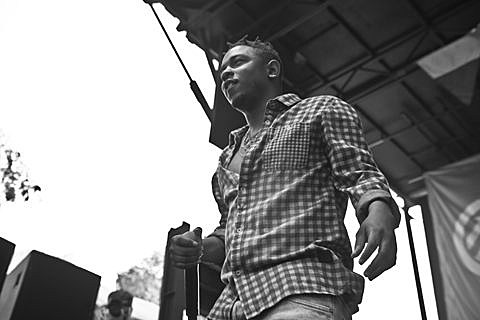 Kendrick Lamar, who was here last weekend to play the Pitchfork Festival, is set to release a new LP, titled good kid, m.A.A.d. city, on October 2 via Interscope/Aftermath/Top Dawg (his major label debut). Much like his set at Pitchfork Fest, BV points out (via an interview that Lamar did with HipHopDX) that the LP will feature little to no guests. Take a listen to its lead single "Swimming Pools (Drank)" at the bottom of this post.

Kendrick will embark on a September/October U.S. tour in support of the album. He'll kick things off in Norfolk, VA and make his way to Chicago on September 23 for a show at the Congress Theater. Tickets for that show are not on sale yet, but check Ticketfly for updates. Kendrick (and his fellow Black Hippy member Schoolboy Q) will return to the area much sooner than that though, for a show at the First Midwest Bank Amphitheater on July 27 supporting Wiz Khalifa and Mac Miller (who is being sued).

All Kendrick Lamar dates and a stream of his new single/a video of him performing it at Pitchfork Fest below...