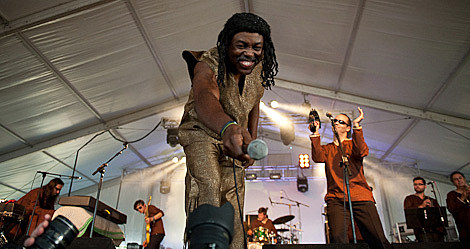 Soulful band Kings Go Forth are set to kick of a fall tour this Friday (9/16), at Chicago's Double Door. They'll continue through North America until mid-October, when they jump the pond for dates in Ireland, Belgium, France, the Netherlands, Luxembourg, and Switzerland. Check out their full fall schedule below.

Keep the funky party going on Saturday (9/17) and head to Brilliant Corners of Popular Amusements to catch Daptone recording artist Charles Bradley. To quote ourselves, "If James Brown was Soul Brother #1, then one of the artists vying for that #2 spot is Charles Bradley, the Brooklyn soul crooner with as many on stage moves as his jacket has rhinestones." Charles released a full-length LP earlier this year titled No Time For Dreaming. Check it out

Fellow Daptonian Lee Fields & The Expressions, who has shared a bill with Charles Bradley more than once in NYC, visits Chicago to play the Bottom Lounge on September 30th with the Windy City Soul Club DJs. Tickets are still available.

Kings Go Forth dates below...