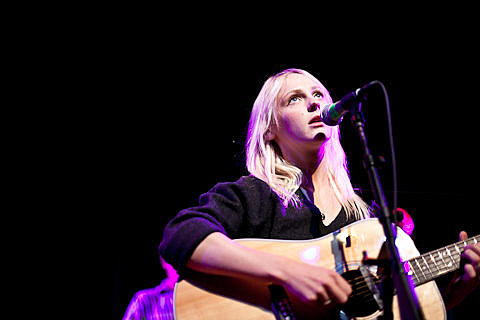 Incredibly endearing UK songstress Laura Marling is set to welcome her new album, Once I Was an Eagle, on May 28 in North America via Virgin Records. You may have already heard the soothing "Where Can I Go" from the LP, and she's also revealed a more intense track called "Master Hunter." While her recordings are in fact great, if you're into Marling, you know she really shines in the live setting. Last week, she performed "Master Hunter" solo on Later... with Jools Holland, and gave the track a welcomed bluesy spin. It's a pretty great clip, which you can check out at the bottom of this post. She's also got a new short film, called When Brave Bird Saved, that can be found alongside the Later... performance.

Laura will be touring North America later this month in support of Once I Was an Eagle. That tour includes a performance at the Athenaeum Theatre on May 23. (Few concerts take place at the theatre, and she also played there last summer.) Tickets for the Chicago show go on sale this Friday (5/3) at noon CST.

All known Laura Marling tour dates, her Later... performance, short film, and a couple of song streams are below...

Laura Marling - "Where Can I Go"