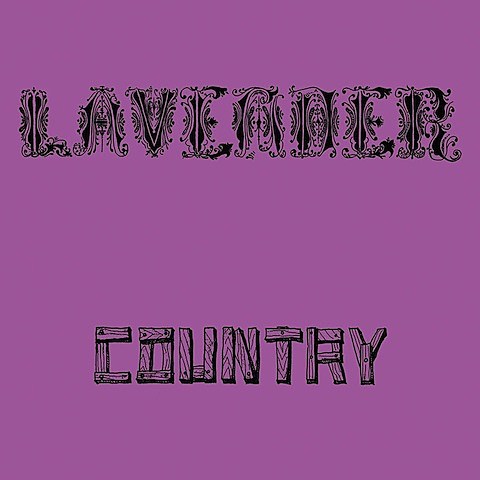 Lavender Country, the pseudonym of Washington state singer/songwriter Patrick Haggerty, released what's widely recognized -- by institutions like the Country Music Hall of Fame and CMT -- as the first openly gay country music album in 1973. The self-titled LP sees Haggerty and co. drawing from classic country players like Hank Williams and Patsy Cline, but also from the avant-folk movement of the late '50s. Lavender Country was originally re-released in 1999, and was more recently given an overhaul by indie label Paradise of Bachelors in March. You can take a listen to the album cuts "Cryin' these Cocksucking Tears" and "Lavender Country" at the bottom of this post. Lavender Country can be heard in full via Rdio, Spotify. I'm particularly fond of the album's lyrically darker moments like "Georgie Pie," "Back in the Closet Again," and "Straight White Patterns," yet it also holds some more triumphant offerings too.

The record reflects Haggerty's experiences: his upbringing on a tenant dairy farm in rural Washington, on the Canadian border; his dismissal from the Peace Corps on the spurious grounds of his sexuality; and his righteous struggles as an outraged young gay man navigating the Pacific Northwest in the immediate aftermath of Stonewall. He designed Lavender Country as a vehicle for what he deems "The Information": valid cultural communications intended to resonate with those unable to access similar resources. (Playing "Cryin' These Cocksucking Tears," one of the indisputably great country song titles ever, cost a brave Seattle DJ her FCC license.)

Haggerty and co. will be embarking on a brief Midwest tour in late-November. That tour includes a performance at Lincoln Hall on November 23. Tickets for the Chicago show go on sale this Friday (8/22) at noon CST. This set of dates serves as their second US run since the late reissue, and the band had previously reunited for a brief period in 2000.

All Lavender Country dates and those song streams lie after the jump...