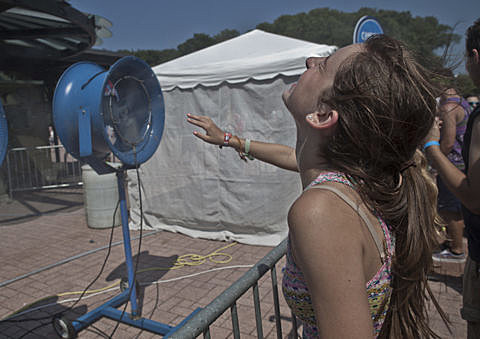 The sun baked the lawns and wide streets of downtown Chicago's Grant Park as Lollapalooza 2012 started off on Friday with bands on all stages minus the two main stages at either end of the park. Aside from the stages, fences, booths, and some Lollapalooza signage, the park remained fairly untransformed for the festival.

I caught the very end of First Aid Kit's set, and at the time entirely forgot the duo's Swedish nationality due to the accent they sang with, closer to a mild Southern US drawl. The softness in their voices gave way to an excited and slightly jarring scream before one of the final choruses. I walked to the south end of the park for The Growlers. Vocalist Brooks Nielsen's nasally twang was the constant as they shifted through relaxed and eclectic styles of rock.

Chiptune quartet Anamanaguci played at the shaded Google Play stage, with a recorded keyboard backing their synthy guitars. Their instrumental electro-punk would make a great soundtrack for a pixelated arcade racing game.

Yellow Ostrich's upbeat indie rock was made slightly more diverse by drummer Michael Tapper's focus on clean drum sounds (no snare buzz) and rattling auxiliary percussion. Alex Schaaf began one song by creating a slightly off-putting guitar loop, which he managed to fit a pleasant vocal melody over before the instruments transitioned into their usual style.

Back at the north end of the park, The Black Angels vamped on heavy southern blues rock as vocalist Alex Maas shook a tambourine and sang with a slight Southern accent and a bit of vibrato. The guitars were dirty when loud, and psychedelic when soft or soloing. They touched on standard blues progressions with choppy, reverb-soaked guitar. 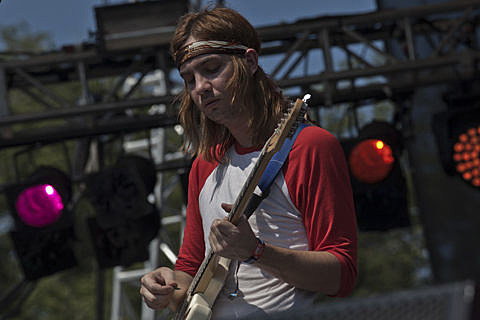 Tame Impala's floating melodies are vaguely similar to a variety of classic rock and pop bands, but their choice of tone obscures it in a psychedelic haze. They performed their hard swinging new single "Elephant", which twists through strange transitions in what is definitely their most complex and heavy work yet, though it did not sound as thick as the recording. There were some minor technical difficulties - Kevin Parker's guitar seemed to short out and he mentioned that he thought one of his pedals was melting (presumably the electronics inside), though his tone remained similar to their recordings.

Perry's electronic stage, upgraded from it's previous tent status, was packed all day with mainstream electronic offerings. Considering the bass dropped every time I walked by, it was fitting that SBTRKT's set took place at the Google Play stage instead, with their chilled tones - largely created live on keyboards - and varied rhythms, which were often played on drums by producer Aaron Jerome. Sampha contributed vocals throughout the set. 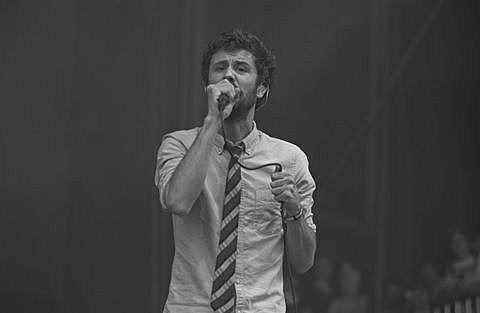 Though they cancelled a few shows, Passion Pit returned to Chicago to play a club show at House of Blues and a set at Lolla on Friday. Frontman Michael Angelakos appeared in good spirits as he greeted the crowd. They opened with the pulsing drums and bold synth of "Take a Walk," which sounded like a near-reproduction of the recording. I then traversed the festival grounds to catch The Shins, who were in fine form. They took some songs a slower pace than I anticipated. James Mercer embellished some of his vocals when he wasn't accompanied by lead guitarist Jessica Dobson's singing.

Five minutes prior to Black Sabbath's set, Ozzy Osbourne's laugh was heard over the PA, followed by sounds of rain. Unfortunately, what followed were only videos of the band and brief samples of their music. Ozzy was heard once again, and the curtain raised for three-fourths of the original Black Sabbath to play classic doom metal piece "Black Sabbath". It was slightly slower than Ozzy seemed to want to take it, hedging ahead at times. His cries of "Oh no, God, please help me" were convincing enough, though I'm not sure he could ever recreate the terror in his voice that was first heard over 40 years ago, especially in sobriety. 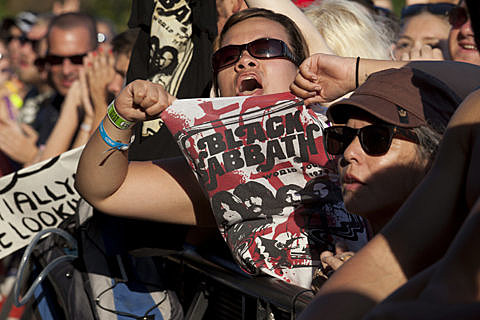 Ozzy played harmonica throughout "The Wizard", and urged the crowd to clap during the time-shifting "Behind the Wall of Sleep," saying, "Come on, you fuckers!" They wrapped up their Black Sabbath portion of the set with "NIB," beginning with Geezer Butler's wah'ed out bass. Tony Iommi played masterfully throughout, leading off the vaguely Latin sludge of "Into The Void" with precision. He used more modern sounding effects on "Electric Funeral", which were paired by Bill Ward replacement Tommy Clufetos' clicky drums. The former Alice Cooper, Ted Nugent, and Rob Zombie drummer was given a drum solo prior to "Iron Man," which he blasted through on his two bass drums. I felt this was kind of a slight to Ward, and totally unnecessary as many drum solos are, but it did hype up the crowd, who weren't loud enough for Ozzy. "I can't fucking hear you!", he screamed more than once. And that was the end of the first of three long, hot days in Chicago.