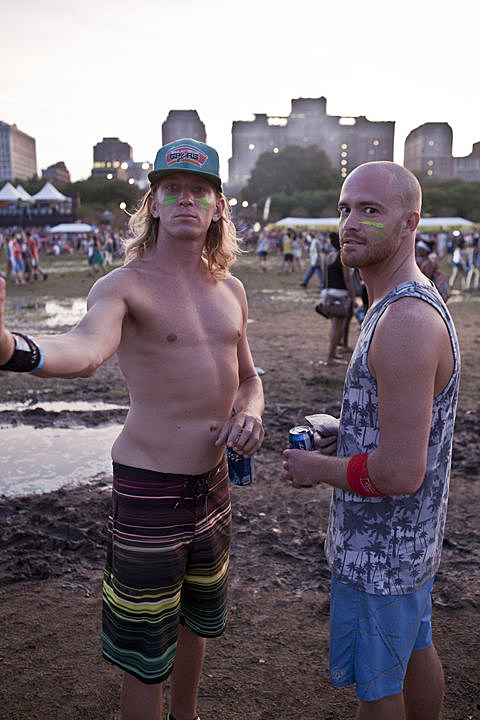 I walked onto the south field of Grant Park on Saturday just in time to catch the last couple Doomtree songs. Within that time, all four emcees (Cecil Otter, Dessa, Mike Mictlan, P.O.S.) had a chance to display their lyrical prowess over the innovative beats produced by Paper Tiger and Lazerbeak, who did some live production.

Shortly after at the neighboring stage, Bear in Heaven's frosty synth tones helped combat the heat. I was disappointed to see Jon Philpot was triggering most, if not all, of the more complex synth parts, but it did allow him to focus on his vocals, which sounded strong and clear. He also played bass for a bit while Adam Wills played soft guitar parts.

Aloe Blacc made up for the dose of soul that I didn't have a chance to get from the grittier JC Brooks & the Uptown Sound earlier in the day. Blacc was backed by a six-piece band that provided smooth funk for his powerful vocals. 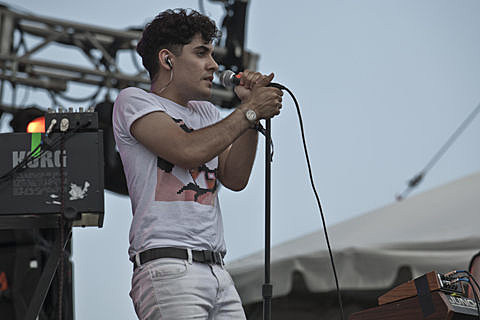 Neon Indian had an array of keyboards on stage for their busy synth pop. The clouds rolled in, and shortly after singer Alan Palomo said their set was cut short due to approaching thunderstorms. He made the following public service announcement, "If this happens to be your first time on psychedelics, drink plenty of water and everything is going to be okay."

As soon as Neon Indian ended, Lollapalooza was evacuated in a lengthy process, putting many thousands of attendees out on the streets of downtown Chicago. After a downpour with lightning and high winds, the park was re-opened with a reworked schedule. A handful of performances were cancelled, including Alabama Shakes, B.O.B., Chairlift, and the Temper Trap (no refunds are being given).

Tune-yards were fortunately rescheduled for 6:30, and Merrill Garbus opened the show solo with the vocal-loop heavy "Party Can". Bassist Nate Brenner and saxophonists Matt Nelson and Noah Bernstein joined her toward the end of the song, following with the jazzy "You Yes You". The refreshed audience sang along to the siren-like vocals in the intro of the wonky hit "Gangsta". After the distorted ukulele jam "Powa", they rocked through the African pop inspired "Bizness". 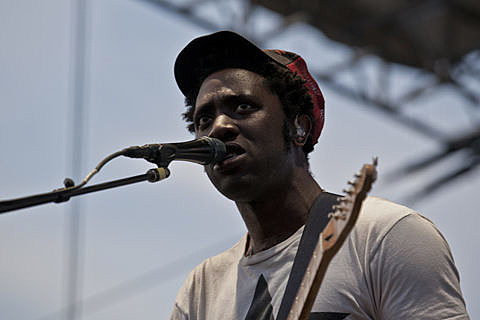 I arrived at the north end of the park just in time for Franz Ferdinand's "Take Me Out," admittedly their only song I'm familiar with. Despite my low expectations, they sounded extremely tight on that and the following song. Bloc Party felt a bit lacking in intimacy though. It wasn't really possibly to get close enough to hear the lower frequencies or what Kele Okereke was saying.

Red Hot Chili Peppers opened with "Monarchy of Roses" from their new 2011 album I'm With You, with Anthony Kiedis using a strange tremolo effect on his voice. The massive crowd cheered as the song ended and Flea launched into a messy distorted jazz solo to lead into the opening bass line of "Around the World" off Californication. Flea and Chad Smith comfortably improvised throughout the part of the set I watched, and Josh Klinghoffer joined in on many of their between song jams. Klinghoffer's tone is much more ambient and noisy than former RHCP guitarist John Frusicante's, making for indistinct but still powerful solos. He skillfully handled the busy clean guitar of "Snow", which Flea prefaced with the statement, "Be kind, be gentle, be nice. Fuck shit up." After another song from I'm With You, they played "Throw Away Your Television", in a rare moment of Kiedis' lyrics making much sense at all. 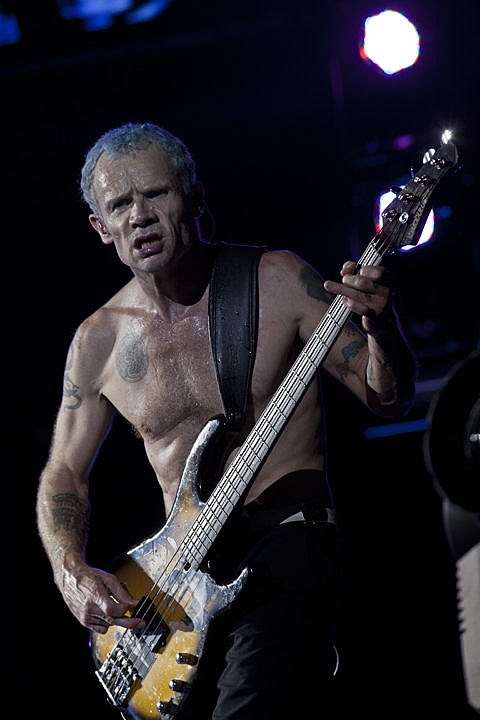 Frank Ocean captivated his smaller but substantial crowd with his impressive vocal range; he hit the high falsetto parts with as much power as his lower notes. Backed by a band, his set was a mix of channel ORANGE and Nostalgia, Ultra.

That was it for me for Saturday, but read about Friday if you haven't yet. Sunday review on the way.