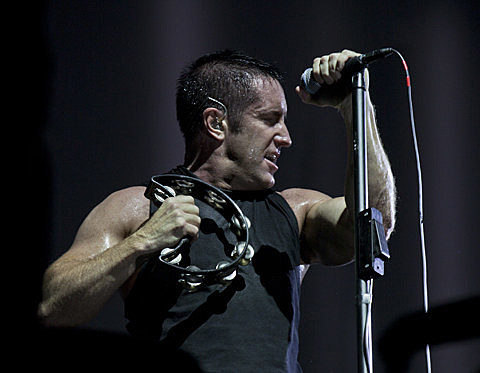 Lollapalooza 2013 began on Friday (8/2) in Grant Park with performances by Nine Inch Nails, New Order, Queens of the Stone Age, Father John Misty, Ghost B.C., and many others. You've already seen one set of Day 1 pictures (more soon over at BV), and here's our review...

Garage rock duo Deap Vally played a great set at the Petrillo Stage, rocking the early-afternoon crowd. All it took was a drum set and a single guitar; it goes to show you that sometimes less really is more. Their bluesy output was a nice kick-off to the day.

I had no idea what I was in for on the way to catch Ghost B.C. at the Northernmost side of the festival. I'd heard that they were a Swedish metal band that liked to wear costumes on stage and were secretive of their true identities, but my knowledge ended there. Once I got to their stage I was greeted by a group of hooded and masked musicians that looked more like members of a pagan cult than a band. If it wasn't for the setting and the instruments in their hands I would have thought otherwise. The band played an intense set of Gothic doom metal that had fans nodding their heads vigorously. How they managed to keep playing in their costumes in the summer heat, however, was beyond me. Styled after what looked like an undead bishop priest, the Ghost B.C. frontman sauntered across the stage oozing confidence. His voice was equally as impressive as his costume. The band's aesthetic may have been a little at odds with the bright sunshine (maybe give them an evening slot next year?) but it definitely helped them stand out, and on top of that they played an impressive set that won me over.

The next act I caught was the absolutely hilarious Father John Misty over at the Lake Shore Stage. Misty and co. ran through cuts from last year's highly-enjoyable Fear Fun, when the frontman wasn't busy telling the Platinum Pass holders they could eat sushi off of him later on. His banter wasn't time wasted though and served to add some context to his somewhat bizarre lyrics (see "I'm Writing A Novel").

The last time I saw Crystal Castles was at Lollapalooza 2009 which was right in between their first two albums. I was curious to see how the band had changed since then, especially now that they've got a third album under their belt. Alice Glass and co. appeared on stage right on schedule. Just like last time, Glass brought along a bottle of booze which she took a sip of before starting the show, but she didn't share it with the audience this time around. The band played "Baptism" during their their set with strobe lights blaring and blue lights shooting beams through the smoke. Glass even crowd surfed a bit and got up close and personal with a few fans. Unfortunately her mic seemed to get tangled up and her vocals didn't come through for the last bit of the song. This however didn't stop her from screaming the lyrics to those around her. Ethan Kathe stuck with a large red synth while Alice messed around with a drum pad and microKORG, later hanging herself with her own mic cable like a human puppet. Never a dull moment with them.

Too good to be pigeonholed as EDM and be placed on Perry's Stage, house music revivalists Disclosure were given the shaded Grove Stage instead. With only a handful of EPs and a brand new debut LP out they gathered one of the more sizable crowds of the day. Curious onlookers who had come for a song or two seemed to have a hard time leaving their fun set. I also left early to go catch New Order and nearly got tackled by the influx of folks running in to see these guys. That should tell you enough.

New Order did not disappoint. They played a solid set that went over their mandatory classics including the famous "Blue Monday," which got people dancing arm in arm in a large mud pit on the right side of the stage. The band were tight and no one seemed to miss Peter Hook too much; his replacement filled in just fine. Frontman Bernard Sumner mentioned that Chicago was one of the few cities to remind him of his band's beloved hometown Manchester, adding that the only noticeable difference was better weather. Those who stuck until the end of the set were in for a surprise. Having enough time to perform a few more songs, the band played a trio of Joy Division classics - "Transmission," "Love Will Tear Us Apart," and the ode to Ian Curtis called "Atmosphere."

It was tough, but I also managed to catch a bit of Queens of the Stone Age's set on the very opposite side of the park. Josh Homme and co. kicked things off in a big way with Songs for the Deaf's "Millionaire" and "No One Knows" into newer scorcher "My God is the Sun." The group were polished to all hell and really got the crowd going. It was one of the most exciting sets of the day.

I had eagerly been awaiting Nine Inch Nails' return for four years, and thought I had found the perfect vantage point to see the band, until a couple of tall middle aged fans came out of nowhere and completely blocked my line of site. Trent Reznor and co. hit the stage 8:15PM sharp backed by some high tech panels that digitally manipulated and projected their shadows. The band sounded astounding and followed their intro with a heavily redone version of "Sanctified." Unfortunately I saw very little of the actual band for the first few songs due to the aforementioned tall fans. Luckily the crowd moved slightly during the set a giving me enough room to find a better spot where I could actually see them. Reznor played many of his hits including the sexually charged "Closer" which received a huge response from the crowd. Other singles followed including "March of the Pigs" (to which fans eagerly sang the refrain of). Reznor also mixed it up a bit by switching to piano for a few moody instrumental ballads. Exhausted and sunburned, I originally planned to leave the show at 9:30 to avoid the exit stampede, but the second half of the set ended up keeping me around until the very end .The last half included more recent tracks from the band's discography including "Only," "Hand That Feeds," "Survivalism," and a few tracks from Broken. The band also played a new song that will most likely be featured on the upcoming Hesitation Marks (Halo 28 for you longtime NIN fans). Reznor closed the show with the brutal and moving "Hurt" that sent chills through the crowd. He once said in an interview that the Johnny Cash cover was so good that he felt like the song wasn't his anymore. Last night he reclaimed it as his own.

Day 2 of Lollapalooza 2013 is currently underway. Stay tuned for our reviews from the rest of the weekend.