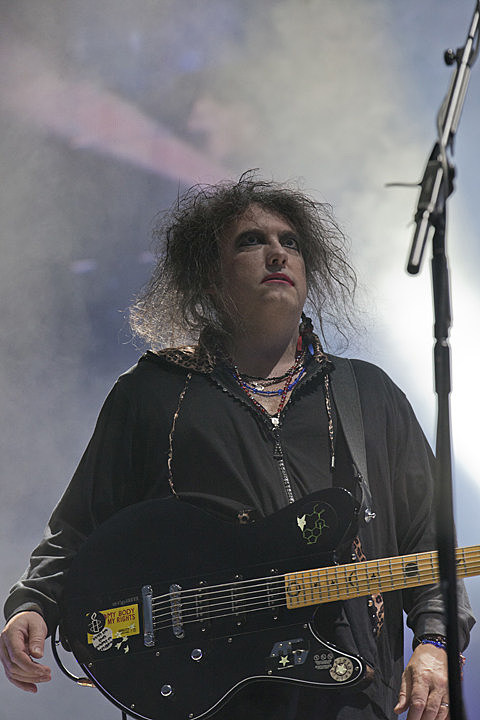 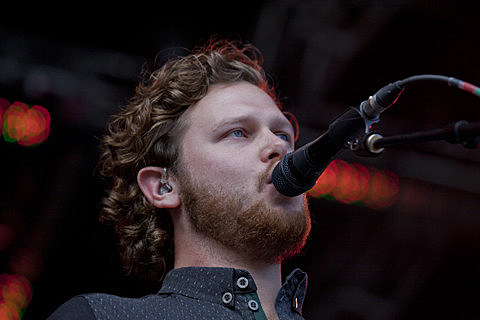 The final day of Lollapalooza 2013 had the best weather out of the entire weekend. Temperatures were comfortably low and there was hardly a raincloud in the sky for the majority of the day. Even when there were some come evening, it thankfully didn't pour like I thought it might.

British newcomers Palma Violets were the first act to play the Bud Light Stage yesterday afternoon. The Rough Trade-signees performed an all-out, energetic set of old school rock for the early crowds. Frontman Samuel Fryer shrieked into the mic while coaxing some thick, screeching tones out of his guitar. It was a great way to begin my Sunday at the fest.

NYC via Detroit rapper Angel Haze had a huge crowd waiting for her well before she was even scheduled to hit the stage at Perry's. Once she did, the young MC managed to deliver an awesomely intimate performance despite the massive setting. Haze got up close and personal with fans by spending a bit of her set latching onto the barriers. She rapped at a feverish pace without any backing tracks, accompanied by a live drummer and another band member who tackled both a drum pad and a bass guitar throughout the set. Things got only better with each song the trio performed, the highlight being "No Bueno." The track's hard-hitting synth line had the audience throwing their hands up in time to it.

After a bit of Angel, I headed over to the nearby Red Bull Sound Select Stage to catch Wild Nothing. It's interesting to see what started out as a bedroom pop project make the jump to huge festivals like Lollapalooza. Though Jack Tatum and company's output is better suited to intimately-sized clubs, they were able to hold their own on the big stage as well. Their set was heavy on tracks from 2012's Nocturne, but they also performed "Summer Holiday" from 2010's Gemini and "Ride" from this year's Empty Estate EP.

Baroness' Lollapalooza performance marked a triumphant return for the outfit after their unfortunate brush with death last August. Playing as tightly as ever, the band tore through a few new tunes as well as anthemic favorites like "Take My Bones Away." Well into their set they thanked folks for coming to see them when so many other acts were playing during the same time slot. As one of the very few heavy offerings of the weekend, their set was not to be missed.

My next stop of the late-afternoon was the shaded Grove Stage for Nathan Williams' Wavves at 4:45PM. With a slideshow of their own photos from tour projected behind them -- obligatory Chicago shots included -- the band opened with the summer anthem "King of the Beach." I only had a limited amount of time to spend with Williams and co., but the great thing about Wavves is that most of their songs are short and hard-hitting. I was able to stick around for a handful of tunes, including Afraid of Heights' great "Demon to Lean On," before heading to the South side of the fest for Alt-J.

The Mercury Prize-winning outfit have absolutely exploded in the past year, and their massive festival crowd served as direct evidence of that. Alt-J performed nearly every track off of 2012's An Awesome Wave with precision, as well as an excellent version of Kylie Minogue's "Slow Dre" and recent live staple // College cover "A Real Hero." Towards the end of their set I began to wander across the way to the Red Bull Sound Select Stage, where a festival crew were prepping for Grizzly Bear's 6PM performance.

Grizzly Bear took the stage for their 101st show of the year (according to the band) to face a full though not packed crowd. The extra room was a nice, almost-foreign feeling after being packed in like sardines at various sets throughout the day. With a staggering amount of 2013 shows under their belt, it's no wonder that the outfit seemed to be performing even their most complex songs with ease. Before playing "Two Weeks," Ed Droste let us know that the plan was to have Beach House's Victoria Legrand join them for the song, as she does on the recording, but their sets were far too close together to pull it off. Droste also urged the crowd to immediately head to the Lake Shore Stage for Beach House, who were the very next act on the schedule. As I left a bit early to secure a good spot for their friends' set, GB performed the expansive Shields closer "Sun In Your Eyes."

I later returned to the Red Bull Sound Select Stage for the band that many festival goers had been waiting for all day: The Cure. As soon as Robert Smith took the stage with his famous frizzled hair and heavy makeup, the audience erupted. The band began their headlining performance with "Plainsong" followed by "Pictures of You." The first handful of songs were slow-moving, but they later picked things up with "In Between Days," "Just Like Heaven," and "Friday I'm in Love." Another highlight was "The Walk," which was near-perfect save for the synth being too low in the mix. Smith's voice came across as strong and clear as ever, which is impressive after close to 40-years since formation of The Cure. I wish their 20-song set had featured more upbeat numbers, but they did polish off their six-song encore with the excellent "Why Can't I Be You" and their classic "Boys Don't Cry."

This concludes our coverage of Lollapalooza 2013. Check out our Day 1 and Day 2 reviews, as well as Day 1 photos, Day 2 photos, and shots from Day 3.