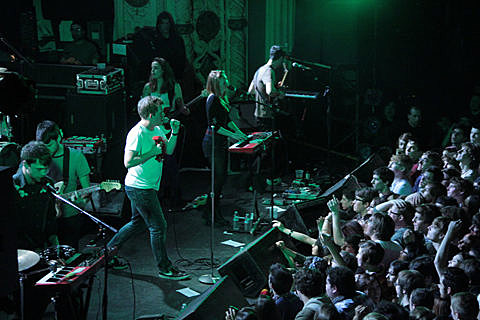 It was an early show, with doors having opened at 6:30pm on a Friday night (1/27). Inside, there was a youngest-Jonas (what's his name?) look-alike, a Camilla Belle look-alike, and a waitress who looked like an Ellen Page-Zooey Deschanel hybrid. It was all an odd-seeming place at the Metro, the crowd looking younger every time I lifted my eyes from my notebook.

Portland-based Parenthetical Girls began their opening in parts. Amber W. Smith came onstage to attend her keyboard as black and white screen-test footage played on a huge screen, in the back behind the drums. The band's music was choreographed well to the accompanying images throughout the set. Frontman Zac Pennington casually approached the mic to a greeting of applause. Matt Dabrowiak came onstage as Paul Alcott sat behind his drums. Pennington introduced the band and mentioned their show at Subterranean from back in June, adding, "Suffice it to say no one was there." There had maybe been about 20 people, I was one of them. "Entitlements" begins. But I quickly noticed, as someone who has listened to (((GRRRLS))) for quite awhile, something seemed very off in the sound. It was too muffled under Pennington's baroque and emphasized voice.

Parenthetical Girls, for those unfamiliar, are part of the new age of melodramatic pop and orchestral composition makers, currently completing their five-part EP series, hand-numbered in blood, Privilege. And on stage they all looked the part, dressed like a boarding school garage band, or prestigious Ivy Leaguers of New England prep schools. It would all be so much more charming if the audio seemed to be coming through clearly instead of sounding like it was being strained through steel wool.

Pennington took a moment after "Careful Who You Dance With" to ask if his good friend Owen Ashworth (who had also played at the June Subterranean show and is a member of Advance Base and earlier, Casiotone for the Painfully Alone) was there. Owen had just brought his first child into the world and thus, Pennington said, they were sans a place to crash that night. I considered offering my apartment especially since my roommate has a cat - and Parenthetical Girls love cats (just look at their Facebook photos).

As "For All The Final Girls" played, the sound issues didn't improve from where I stood, but the suspense of the onscreen ever-changing footage and the blasé strutting around the stage almost made it work. When "Young Throats" played, sounding almost unrecognizable to the incredible album version, I noticed there was a uniform slow bobbing in the crowd and maybe there were at least a hundred people on the floor. Good.

Closing with "Stolen Children" was a typical Parenthetical Girls experience, as Pennington took this chance to peruse the crowd, surprising the people who parted way for him and his drumstick, keeping tempo on the overhanging mezzanine as he wound his way around the floor and back to the stage. Smith's vocals soared clearly and simply, almost like making amends for any point where clarity was lost. They were off a little before 8:10pm. 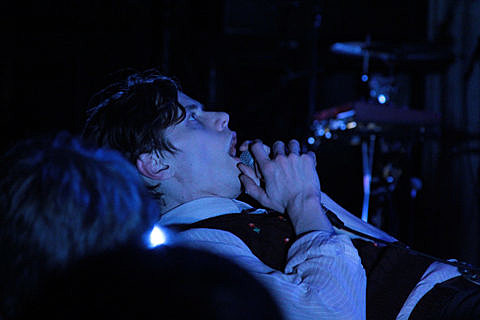 Now it was beginning to get hot and more and more people from the bar were finding crevices to occupy on the floor. And then, at 8:38, the lights went out and Los Campesinos! took the stage. The energy was already in go-mode as if we'd all been listening to them perform for a while now - everyone was well ready. Seven performers all on the stage.

Jumping in the air, the crowd throwing hands up spastically, it was obvious the set would be satisfying. "Good evening, Chicago, we're Los Campesinos!" There were so many people on stage that it provided ample places to keep your eyes entertained if you weren't watching the occasional crowd-surfer. The band seemed a little nervous, a little reserved perhaps, and lead singer Gareth Paisey was a ball of energy that didn't seem to quite know how to release. Lyrically he could become aggressive - the best parts, in my opinion - but physically there was a lot of stand-still.

For "Life Is A Long Time" the lights turned down a bit for a calmer feel and everyone started a quick hands-in-the-air-clapping round. The red lights were seductive as the band alternated between standing relatively in place and gyrating slowly. The keyboardist I am assuming to be Rob Taylor, also known as Sparky Deathcap, seemed to be looking up at the crowd as if looking for someone in particular. And he looked over the packed and jumping floor a lot. During "Letters From Me To Charlotte" it was nice to see Gareth (as all members use Campesino! as a surname) standing still with a shaking tambourine against him, bathed in both sweat and green lighting. There must have been more turbulence on the floor than I was thinking, since after the song he warned the crowd to be careful, "you'll ruin the weekend, the whole weekend!" Pennington had been right - those UK accents will haunt us for days.

Before starting "Songs About Your Girlfriend" Gareth asked if any couples were there. Aw, maybe he'll sing something sweet. No, he didn't, and it was all the better. He warned the lovers in the house instead: "This is a place of despair and loneliness. Don't take it personally." Drowned out by cheering.

When Gareth spoke, I didn't fully understand him - and not because of the sound system. Los Campesinos! had much more clarity and ringing to their music than their ill-fated opener, but it was those accents... at one point all I understood was something about "it's Friday, isn't it?" It had been one week since the band played on David Letterman, something that was "really important to us," Gareth said. The crowd agreed. And then they played the song they "probably should have played." Starting with all their backs to us in dim lighting, clapping into a furious instrumental crescendo until they turned around and began "You! Me! Dancing!" The man next to me leaned over and told me, "This is the song Wilco's missing." Statement up for your deciding, readers.

Before the final song, "Baby I Got The Death Rattle," Gareth took the moment to give thanks in the style of an Academy Awards acceptance speech, hurried and including a long list of names. All I caught were "Parenthetical Girls" and then of course "Chicago." The usuals. Now, as he sang this last song, his voice sounded different, fuller and bellowing with more of him that didn't feel like it was all there earlier.

Regardless, all were satisfied - and no one moved at the end, chanting the typical encore coo, "one more song!" until Los Campesinos! returned for two.

More pictures from the night and both setlists below... 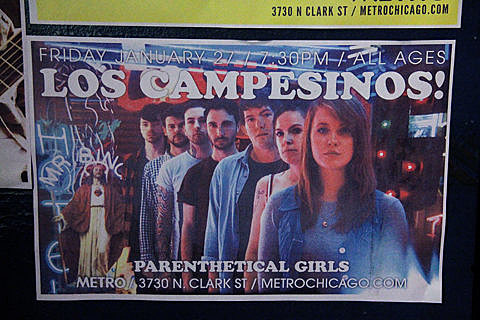 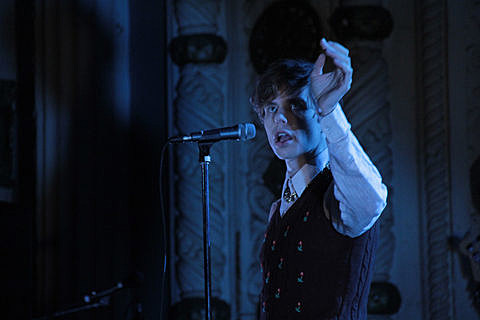 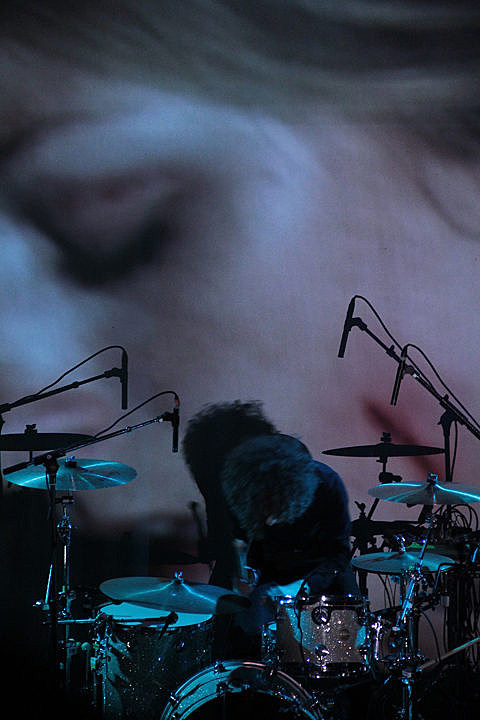 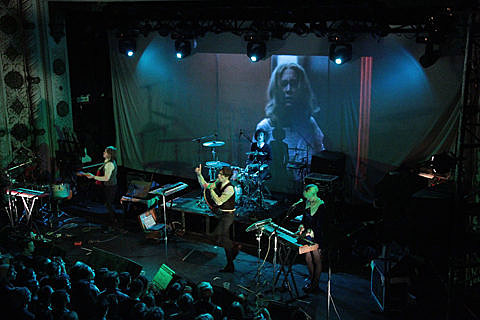 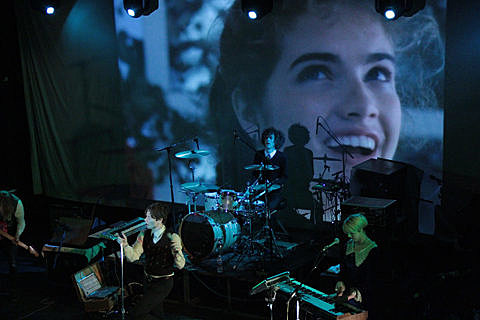 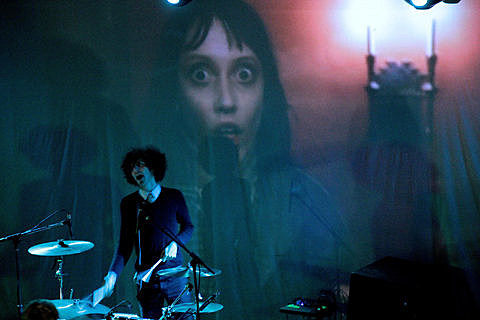 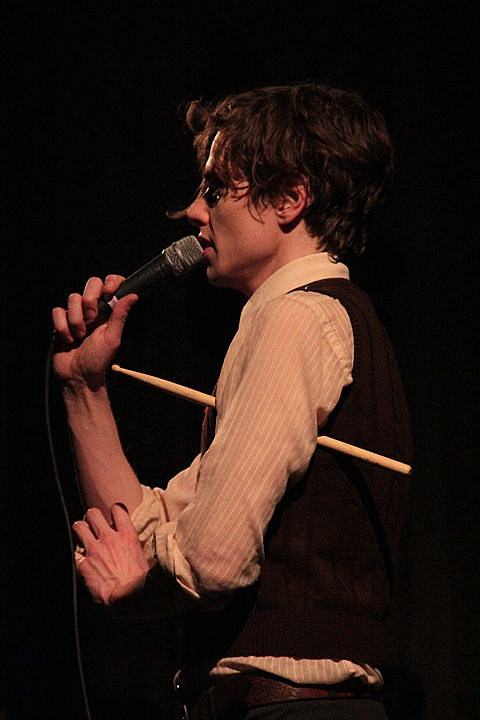 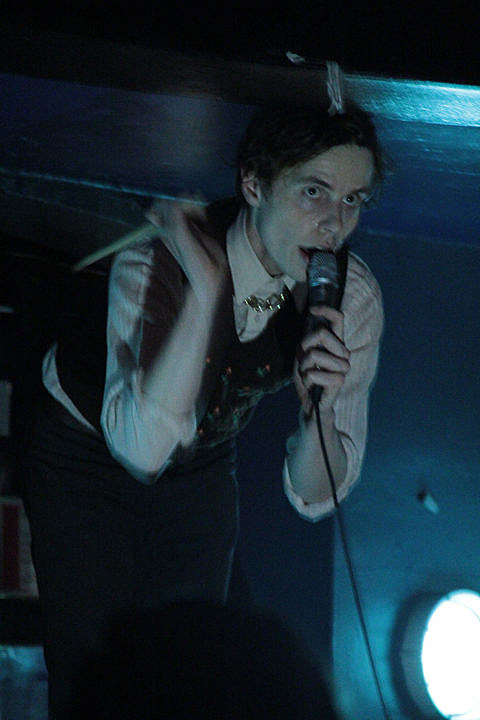 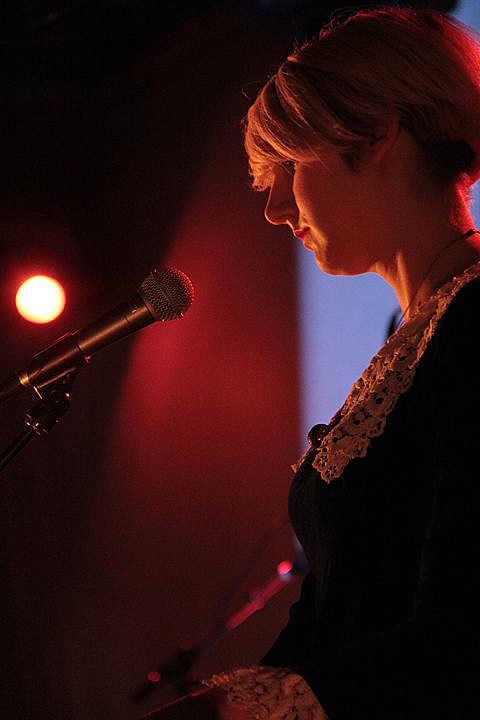 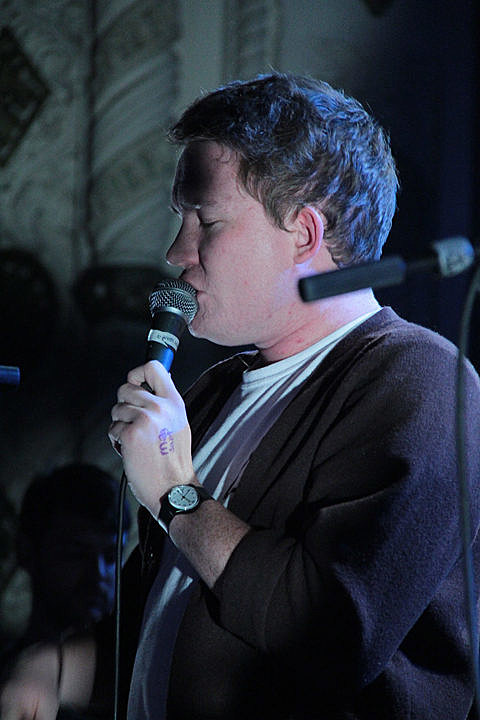 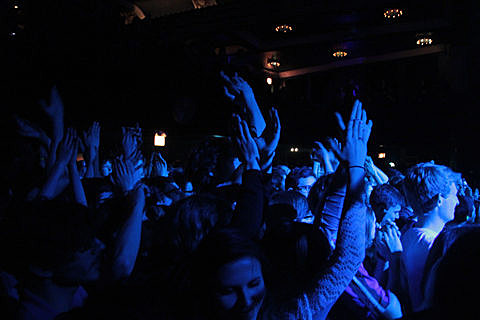 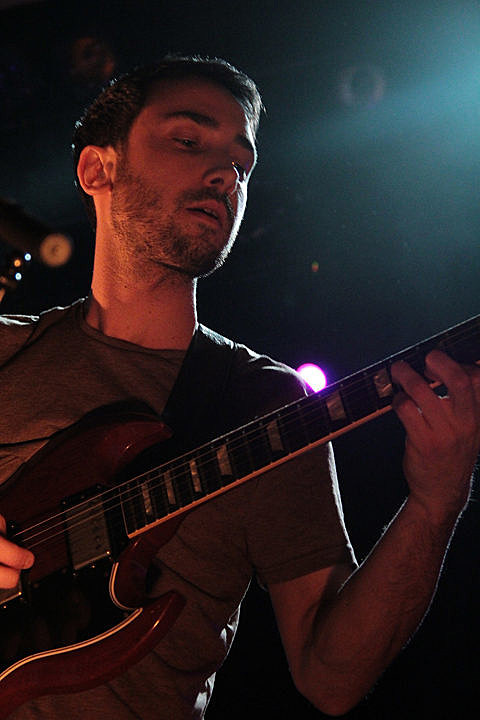 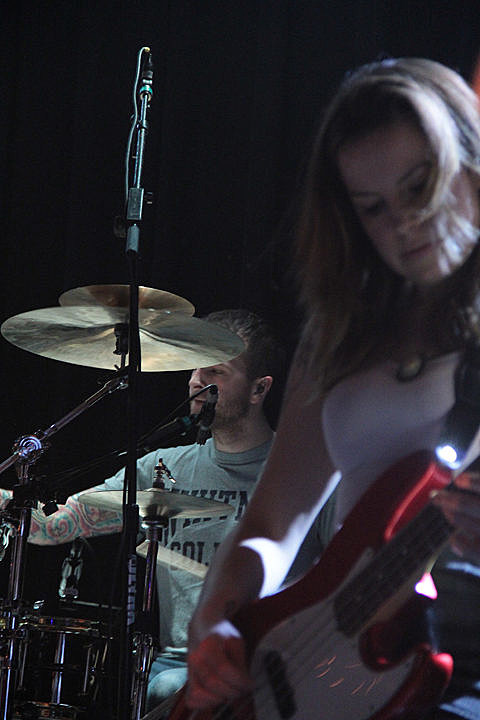 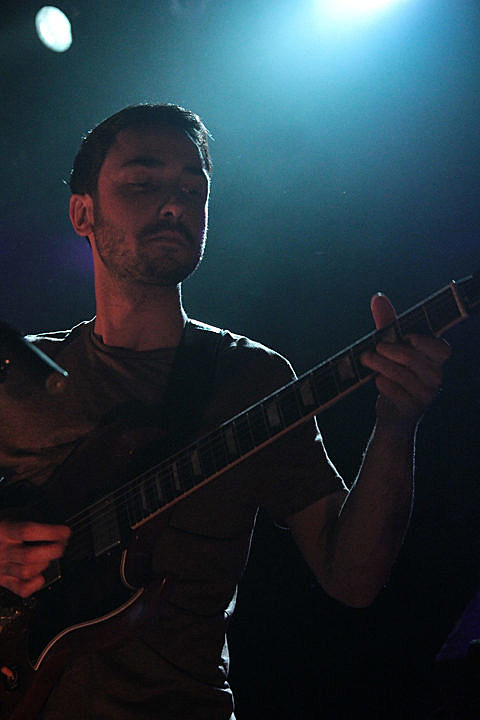 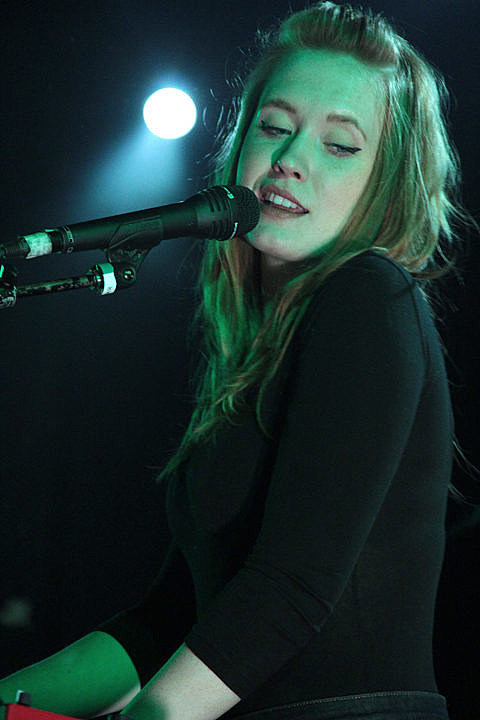 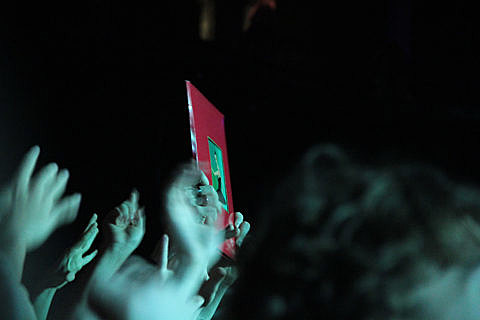 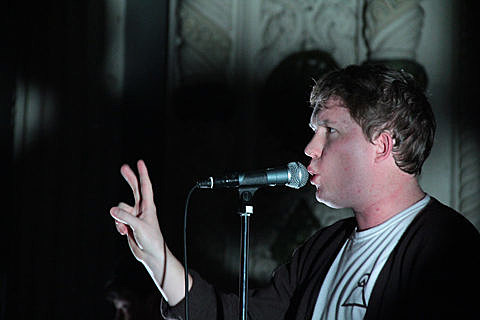 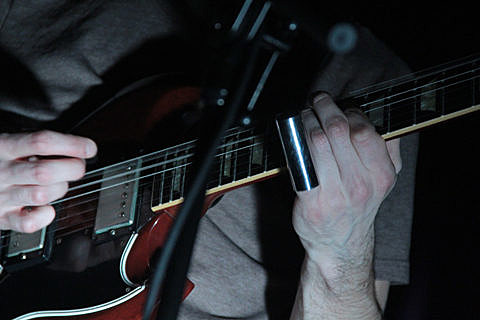 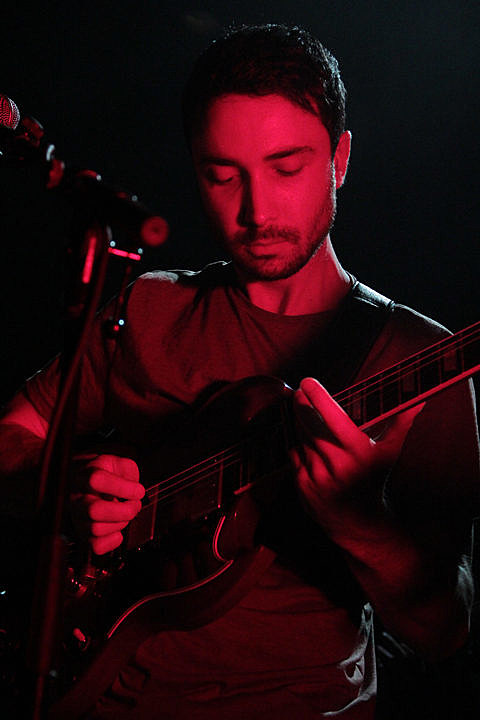 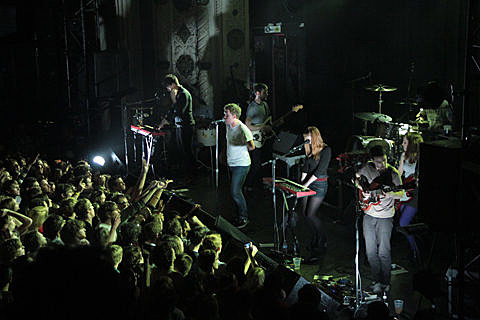 --
Parenthetical Girls - 1/27 Metro Set List:
Sympathy For Spastics
Entitlements
Careful Who You Dance With
For All The Final Girls
A Song For Ellie Greenwich
The Pornographer
Young Throats
Handsome Devil (Smiths Cover)
Stolen Children
--
Los Campesinos! - 1/27 Metro Set List:
By Your Hand
Romance Is Boring
Death To Los Campesinos
Life Is A Long Time
A Heat Rash In The Shape Of The Show Me State; Or, Letters From Me To Charlotte
Songs About Your Girlfriend
We Are Beautiful, We Are Doomed
There Are Listed Buildings
Straight Talk 101
To Tundra
The Black Bird, The Dark Slope
You! Me Dancing!
The Sea Is A Good Place To Think Of The Future
Hello Sadness
Baby I Got The Death Rattle
•••••••••••••••••••••••••••••••••••••••
Miserabilia
Sweet Dreams, Sweet Cheeks
--