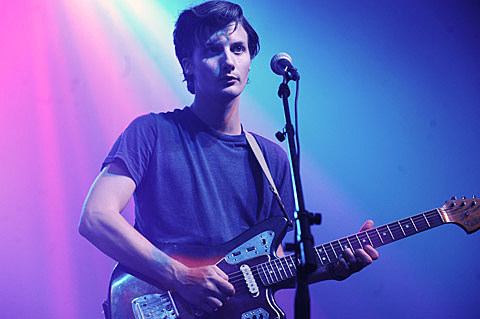 Lotus Plaza (aka Deerhunter guitarist Lockett Pundt) just released his sophomore LP, Spooky Action at a Distance, earlier this month via Kranky, and is about to kick off a tour in support of it. As I wrote on BrooklynVegan, it's a huge step up from his debut and:

The songs are driven by looping beats that either seemingly or literally don't falter throughout the entirety of each song, notably popping out with the drum rolls of "Strangers" or the krautpunk backbone of "Remember Our Days." The album sounds largest with its centerpiece, "Monoliths," which gives "Desire Lines" a run for its money as Lockett's best song yet. It opens with two quick verses and then spends more than half the song with crashing cymbals and the repeated line, "And one of these days, I hope I come around," ending in "One of these days, I'll come around." The album's most surprising moment comes on its closing track, "Black Buzz," an acoustic ballad with Lockett's vocals intimately foregrounded, and the one track on the album that makes Lotus Plaza actually seem like a solo project.

He's supporting the album on a tour with labelmates Disappears which kicks off in Chicago on Friday (4/13) at Lincoln Hall with Implodes and DJ Heterodyne. Tickets for that show are still available.

All dates and more at BrooklynVegan.