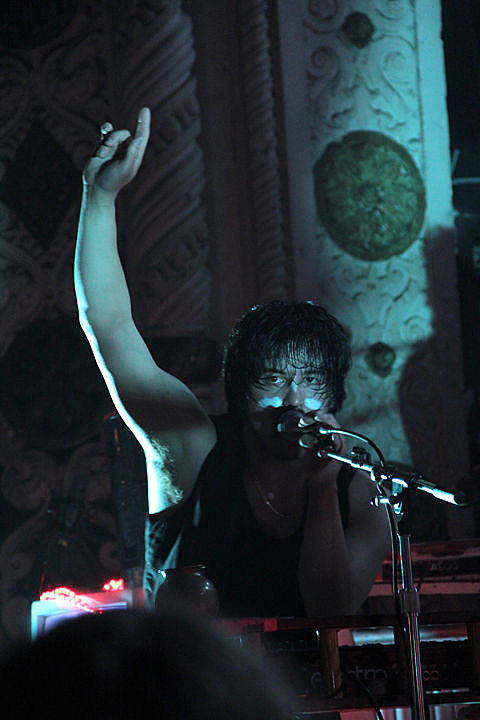 Due to a slight photo pass mixup at the door, we were unable to cover the opening set of Shilpa Ray & Her Happy Hookers. Ray's howls, and screams echoed into the lobby as Grant and I waited and it sounded damn good.

Man Man opened their May 24th appearance at Chicago's Metro with the dark, piano-driven waltz "Feathers," building tension to lead into the energetic synth and toy wind instruments of "Hurly Burly." The five performers wore all black and had lines of white tribal face paint, each with their own station that contained a variety of instruments. They are a seriously talented band that borders on blues, ragtime, gypsy jazz, and the heavier, yelled Modest Mouse songs found on Good News for People Who Love Bad News to create their own distinct sound.

The ratio of instruments to performers on the stage was higher than I've ever seen of any other band, with an emphasis on keyboards and percussion. Vocalist and keyboardist; Honus Honus sat facing their drummer, who had a toolkit full of percussion instruments, ranging from novel and bizarre to professional. On the right side of the stage behind the drummer, the guitarist played xylophone, various drums, and a trumpet supported by a stick about a foot in front of his face. A mannequin hand and face were attached to his xylophone and mic stand.

Main keyboardist; known as 'Critter Crat' had several toys, including a keytar, in the center of the stage. There was a 3-foot tall cutout of a diamond attached to the keyboards, with Chicago Bulls jerseys hanging on each side, one for Derrick Rose and the other for Dennis Rodman.

Bassist; Sergei Sogay was on the left side of the stage with a vibraphone, a wind powered melodica keyboard, a saxophone supported in the same manner as the trumpet, and the back half of a bike, which ended up being a makeshift ratcheting percussion instrument. At one point he played two saxophones at once to create chords. Red rope lights snaked over the tops of each of the multi-instrumentalist's stations.

By the time they played "Top Drawer," the crowd was dancing, on the verge of moshing, but no pits ever broke out. Honus stepped away from the keys and donned futuristic glass, pulled confetti out of his coat, and threw it in the air. When they performed "Doo Right," the crowd screamed along in the pauses. Honus, having changed into a sparkling green blouse, pulled out rings of keys and began jingling them. The crowd following suit to set up the xylophone-driven "Ballad of Butter Beans." Pulling red feathers out of another pocket, Honus blew them into the audience before running back to his keyboard.

Shilpa Ray performed backing vocals on "Life Fantastic," the title track of the new Man Man LP. Their most bizarre songs included "Mister Jung Stuffed" and "Engrish Bwud," while "Van Helsing Boombox" and "Rabbit Habits" rounded out their relaxed side.

Head below to view more of Grant's photos. 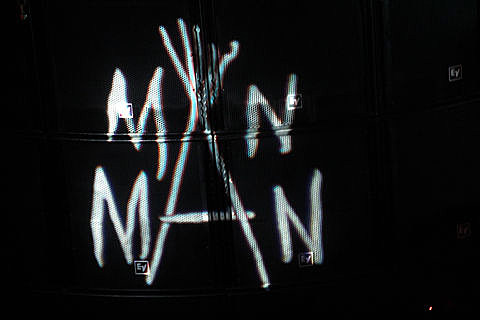 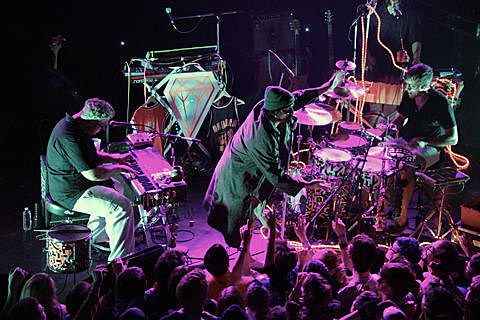 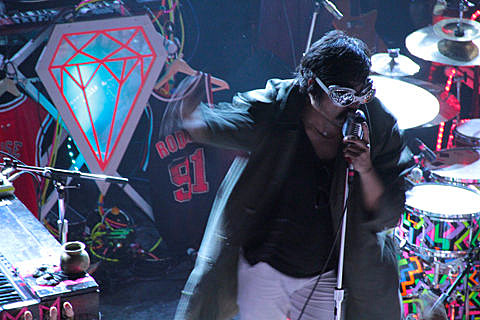 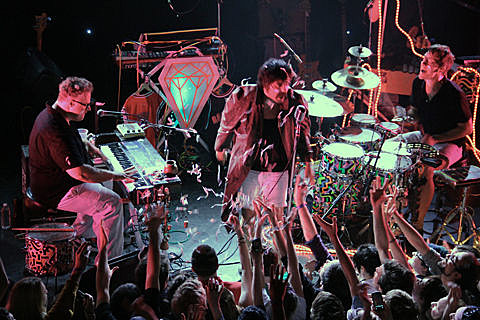 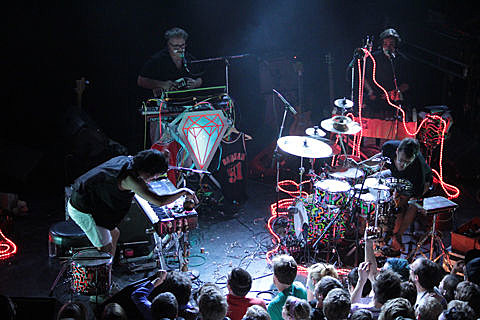 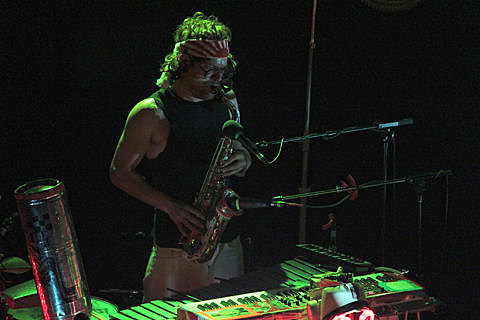 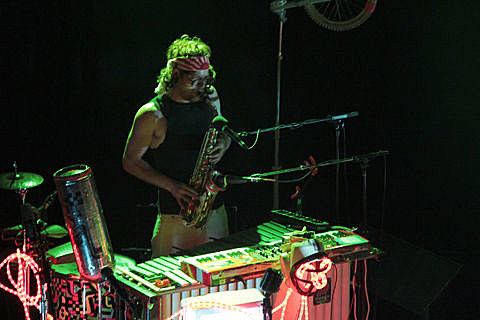 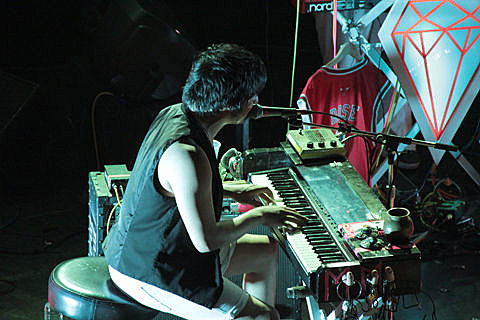 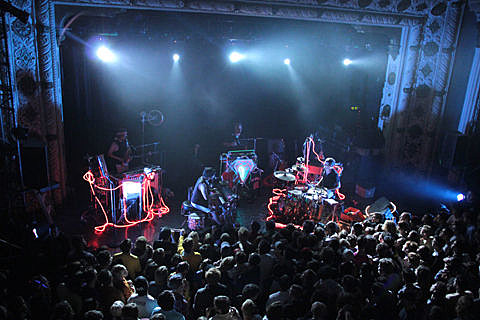 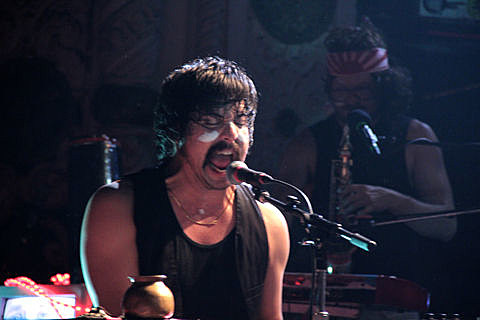 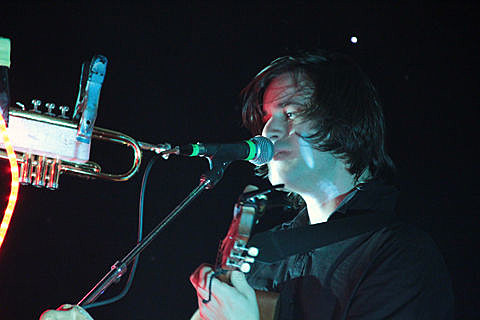 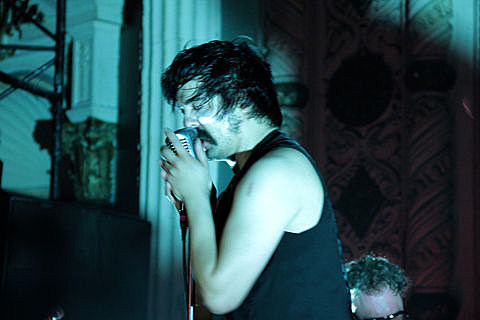 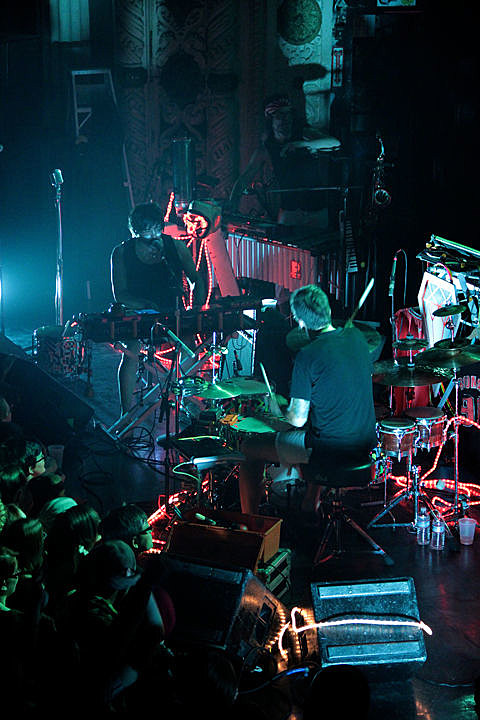 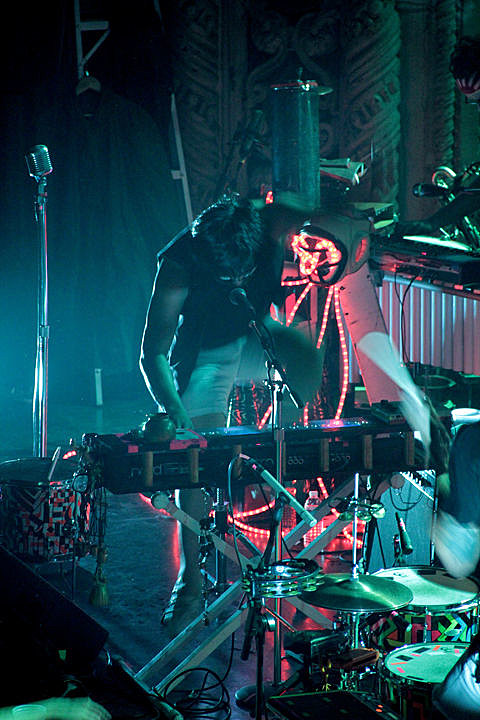 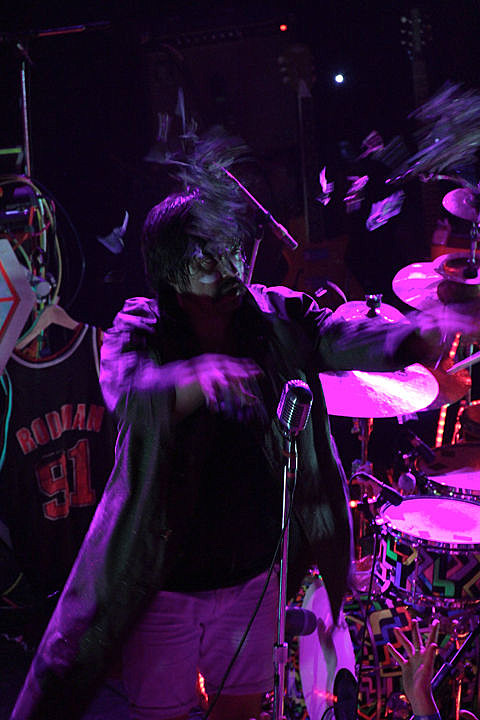 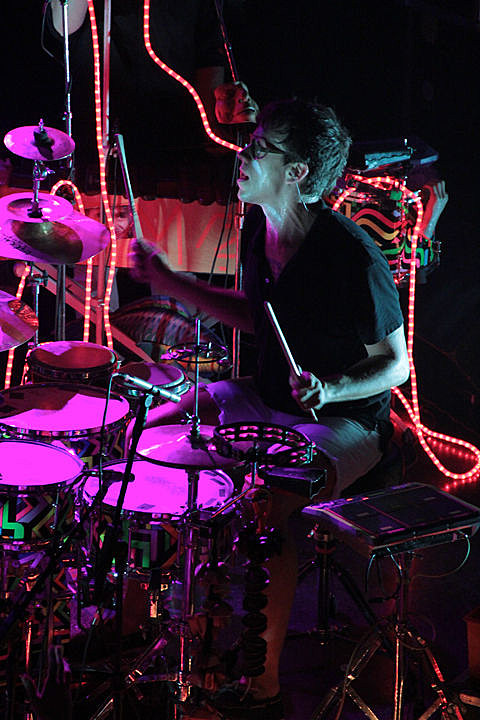 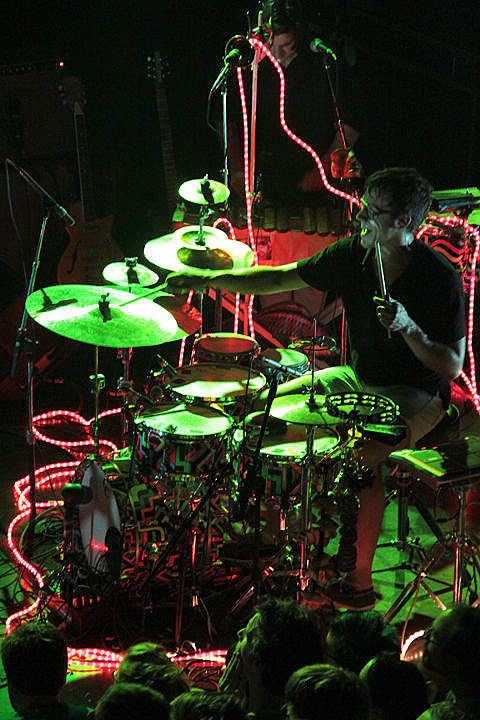 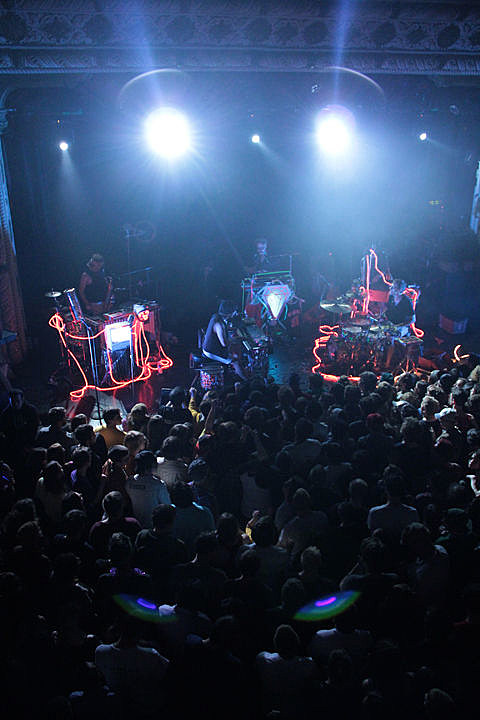 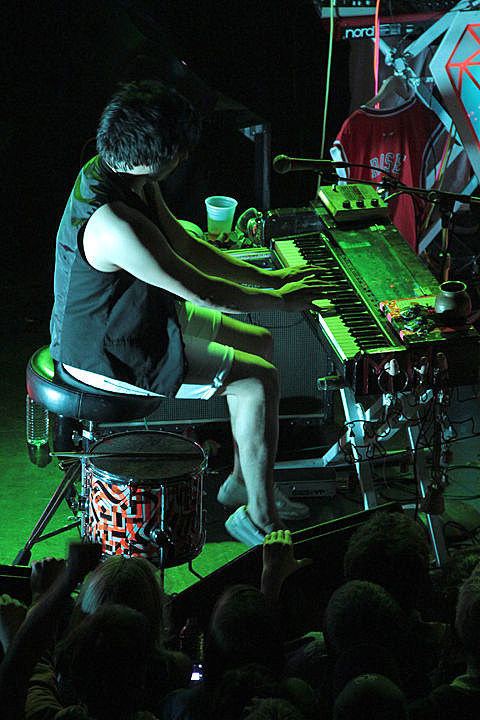 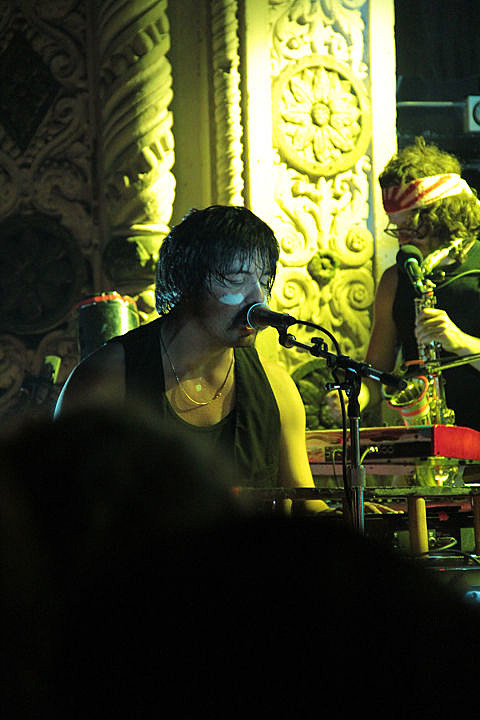 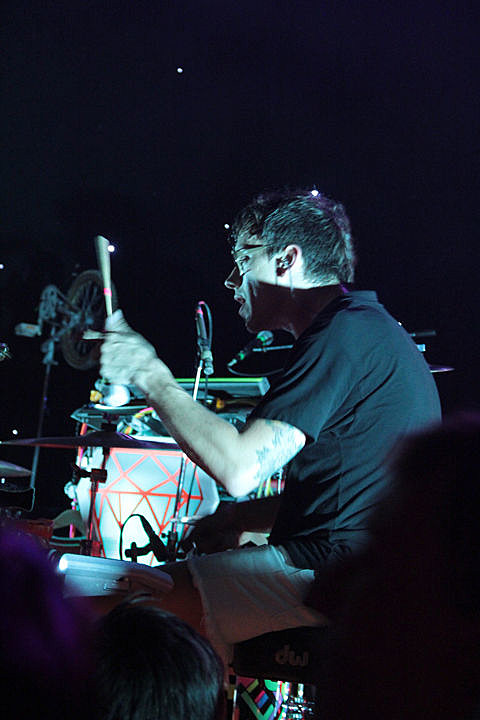 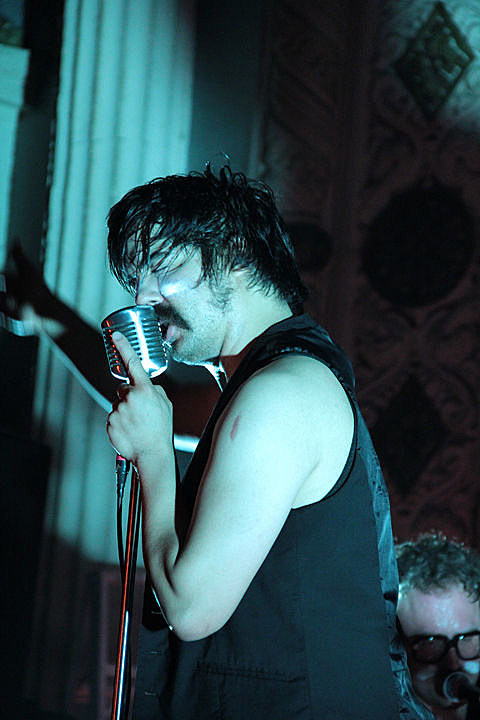